A Taste of Jasper Whitewater 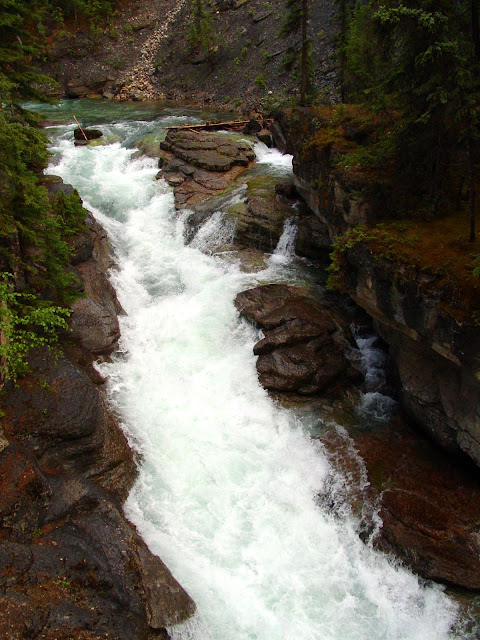 The whitewater in Jasper National Park needs no introduction. The rivers and creeks here have been well documented in various kayak movies (Twitch II, Entropy, Greyscale), guidebooks, and websites. For paddlers in the central interior of BC, it’s a bit of a jaunt to get to Jasper. But when our local runs have dropped to low summer levels, the Rockies can still have some prime paddling and the road trip is well worth it. Recently I had the chance to do a few of the classics in Jasper, with Bliss-Stick kayak rep and local Andrew Loughlin. 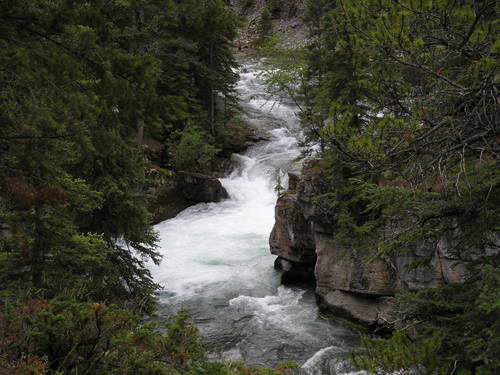 Maligne River (class IV)
Probably the shortest most fun river I’ve ever paddled. If you are passing through Jasper or have an hour to kill while there, get on this river cause it is super good times. This run requires no shuttle and scouting can be done during the 15 minute hike up from the Fifth Bridge off of Maligne Road, just east of Jasper. Ever climbed at the Rock Gardens? The suspension bridge crossing the river on the way to the crag is one of the take-outs. If you’ve hiked all the way down from the Tea House at Maligne Canyon you would have also passed by this section. The rapids are pool-drop in a fast narrow canyon with deep water before opening up into wide open easy boulder gardens. We skipped a gnarley rapid up top called The Sickle (pictured at the top of this blog post) and put-in above a 4 foot ledge drop shown above. This leads around the corner into a hole then a series of drops called Two Timer and Turbo Booster. After this it’s a class II float to the finish. What a hoot! Levels were considered medium for our run. 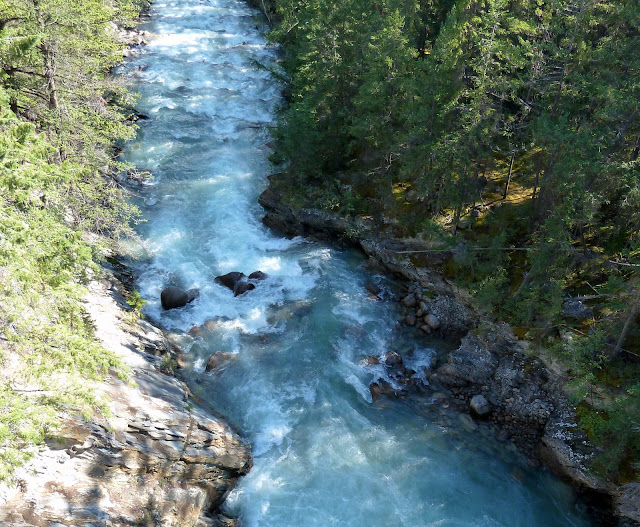 Lower Astoria River (class IV)
The Astoria River shown above flows out of Amethyst Lakes in the Tonquin Valley. The lower section starts just above the Highway 93A bridge that crosses the river, south of Jasper. From the bridge you can get a good idea of what you’re in for --- continuous steep boulder gardens and a few fun drops. The take-out is where Highway 93 crosses the Athabasca River. The run is about 3.5 km on the Astoria and a couple clicks of floating down the Athabasca. According to Andrew, levels for our run were low and it's much better at higher flows. It’s still worth doing at this level but I would like to return next year earlier in the season. The action is non-stop with very few eddies and constant holes and rocks to navigate. Other than the three drops you can see under the bridge, there is a surprise canyon drop in the middle somewhere that we didn’t scout, but the line was obvious enough. In the lower part of the run, there was one wood hazard Andrew was able to somehow duck, but I opted for the portage. The river was shallow in many parts and flipping would not be pleasant. Other than a good brace, elbow pads are highly recommended. 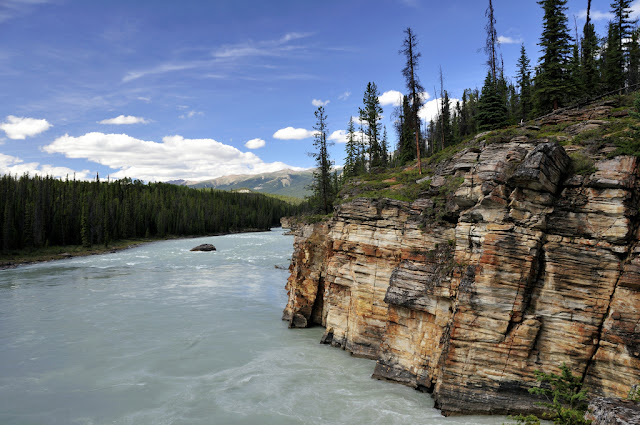 Athabasca River – Falls Run (class II)
There are numerous sections of the Athabasca in Jasper Park, many of which are rafted by commercial companies. While there aren’t any significant rapids, there are some stretches like the run below Athabasca Falls that have some fun waves trains, pushy water, and catch-on-the-fly surf. However the best part is the scenery of the Athabasca Valley and surrounding peaks – gorgeous! The take-out is on Highway 93A at the “Meeting of the Waters” where the Whirlpool and Athabasca meet. The put-in is also on Highway 93A at the Geraldine Lakes parking spot, with a short trail down to the river below the canyon at the Falls as shown in the picture above. The run is 12 km long, and most of the action is in the first few kilometres. The water is milky glacial runoff, so bring your mitts. After Andrew gave me the beta for access, I made the solo trip down this run to enjoy the views.


Other Runs
The rivers I’ve listed above are just a taste of the whitewater Jasper has to offer. Other classics include Beauty Creek (V+), Upper Astoria (V), Fiddle (IV), Upper Whirlpool (IV), Sunwapta (II-III), Lower Whirlpool (II), and the Athabasca River Mile 5 section (class II). For more information check out the Kayakwest website, Paddling ABC, and Kayak To Hell. You can also get all the info from the guidebook for the Canadian Rockies by Stuart Smith.