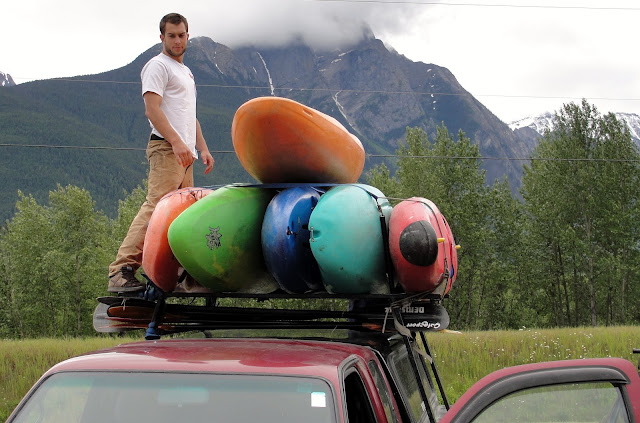 The Shuttle Set-up
Over the July Long Weekend, Ben, Mike, and I from Prince George made the trip out west to check out some of the whitewater in the Smithers and Terrace area. With river levels dropping quickly across this part of the province from low snowpacks and little rain, we didn't really know what kind of action we would find. The plan was to hook up with some of the friendly locals and see what was running once we arrived. 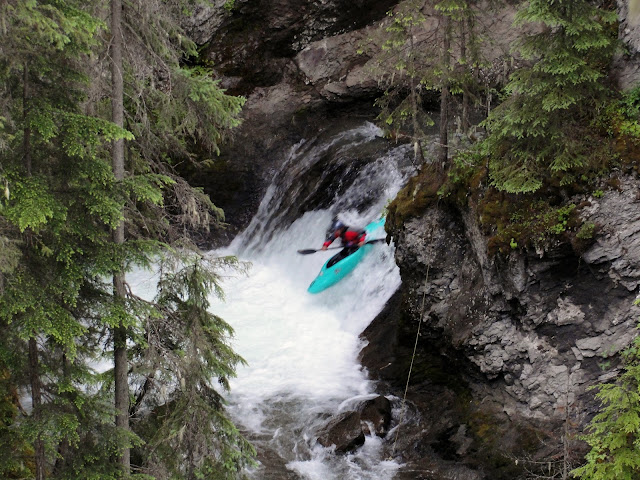 Mike on the first drop under the bridge, East Boulder Creek
When we rolled into Smithers on Wednesday night, we met up with Sean who took us out to East Boulder Creek. This run is a northwest classic and a testpiece for any aspiring advanced boater. Boulder is  challenging (class IV+) and super steep --- there are seven waterfalls ranging in size from 7 to 20 feet tall, a gnarley slot, numerous shallow technical boulder gardens, all stacked within 800 meters of river. Levels were considered medium, but after having a look I thought it was a little much so I ran shuttle while the boys put-on. I felt somewhat justified chickening out after I watched our guide swim on the first drop --- a stout 20 footer called Blue Fungus. But at the take-out I could hear the hoots from the canyon below and from the grins on their faces, it was clear this run was a must-do for next time. 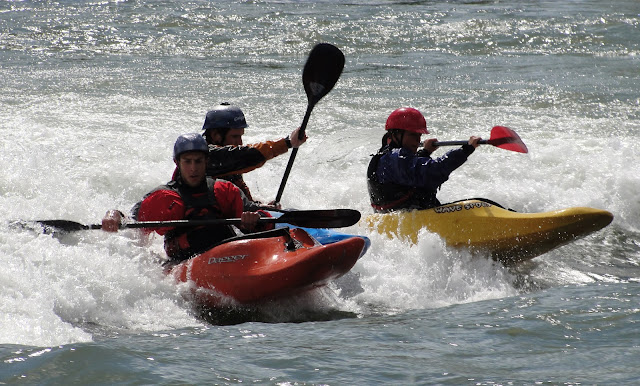 Mike, Ben, and Tlell surfing Tatlow Falls
In the morning we decided to check out the playspot at Tatlow Falls on the Bulkley River with our friend Tlell. This is the local park-n-play spot for Smithereens. While the wave itself can be pretty flat it still gives enough speed and retention for decent surfing. After an hour or so of fun and good times, we packed up and headed further west to Terrace. 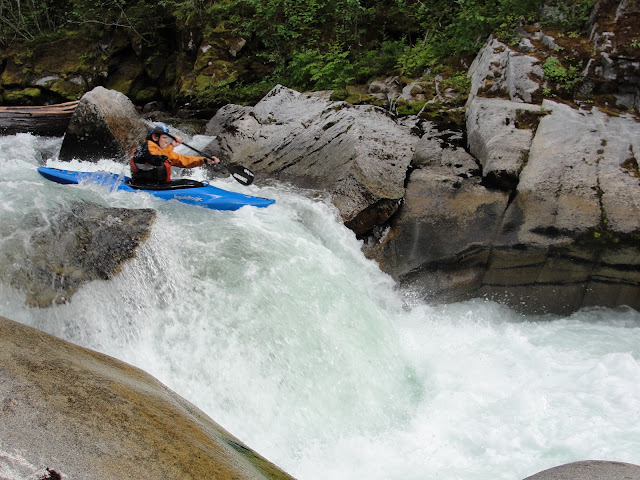 Ben on Toothache, Upper William Creek
Terrace is argueably one of the best whitewater destinations in the world. There are several road trips worth of runs here, mostly in the class IV and higher range. We were lucky to have PG ex-pats Joe and Morgen set us up in their super nice home on the Skeena River, which put us within easy striking distance of all the goods. Later on Thursday afternoon, we headed up to Williams Creek and ran the race course to waterfall section (class IV). Despite very low levels and a bit of bump n' grind between the rapids it was still fun, especially the last drop --- a super clean 10 footer into a nice pool. I imagine this run at higher flows would be pretty amazing. Next year for sure. 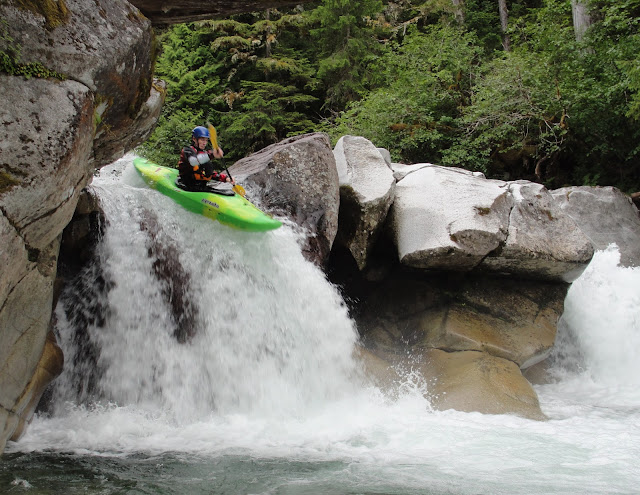 Matt on Williams Creek
Later that night at the pub, Ben and Mike hatched a plan with Corey to run Hirsh Creek the next day, one of the hardest runs in the northwest. Unlike East Boulder, I had no problem opting out of this one. So then on Friday AM while the boys headed to Kitimat for the Hirsch, Joe and I took our playboats to the Kalum River (class III+). I haven't been on the Kalum since the Terrace Paddle Party in 07, but remembered some big water. Yep, this is a super fun big volume run with lots of huge haystacks, a few holes, and good play. During our run, the level was about perfect to form a monster crashing diagonal in the second canyon called slap wave.  Joe had a good chuckle after I got the slap-down. Youch!

Reports from the Hirsch were as expected, an intense full-on class V creek. Ben got a chance to perfect his underwater cartwheel in one of the drops, while Mike found a good sized boulder to test the strength of his helmet on. Nice one! 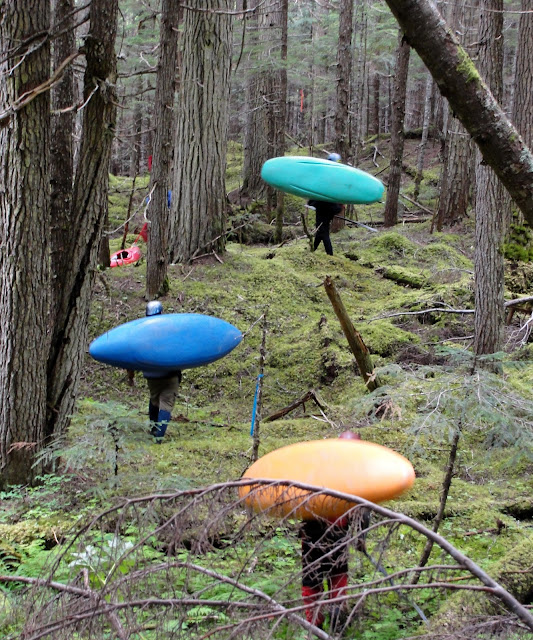 Hike into Shegunia Creek
Once again later that evening we ended up at the pub, discussing ideas for what rivers or creeks to do for the next day. Having heard a lot of good things about the Shegunia Creek near Hazelton from a number of people, we figured this was the run for Saturday. We made the call again to the Smithers posse, and thankfully got Corey's girlfriend Amy to run our shuttle. 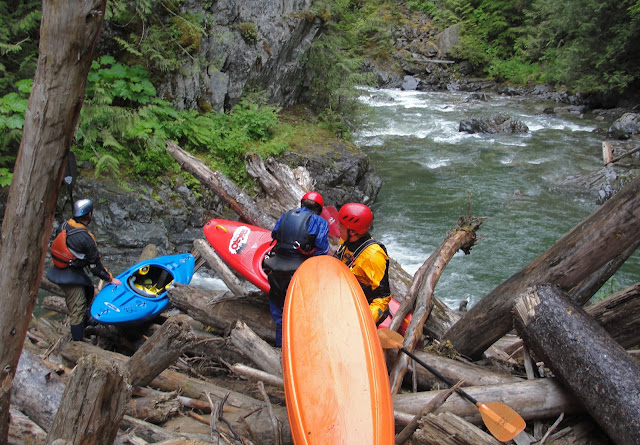 Portaging over a log jam on Shegunia Creek
Shegunia Creek comes out of the Tomlinson Mountain Ranges around the Suskwa and enters the Skeena near Kispiox. There are two runs, the lower (class IV-) and the upper (class IV+). We did the lower run, about 22 km of paddling. The top part and bottom are mostly shallow easy boulder gardens, while the middle section is a long and very deep committing canyon with continuous pool drop rapids. One of the highlights in the canyon section was the Birth Canal (shown below), a drop into a long narrow winding chute. Another highlight was near the end of the canyon called the Coliseum, where the shear canyon walls tower almost 100 meters straight above the river. Amazing! There was also a ton of wood on this run requiring careful navigation and a couple portages. After five or so hours on the river, we were driving back to Smithers for dinner and a late night of beers and cheers. 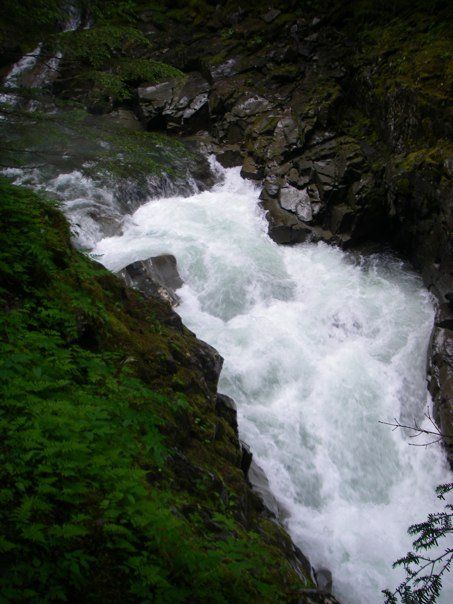 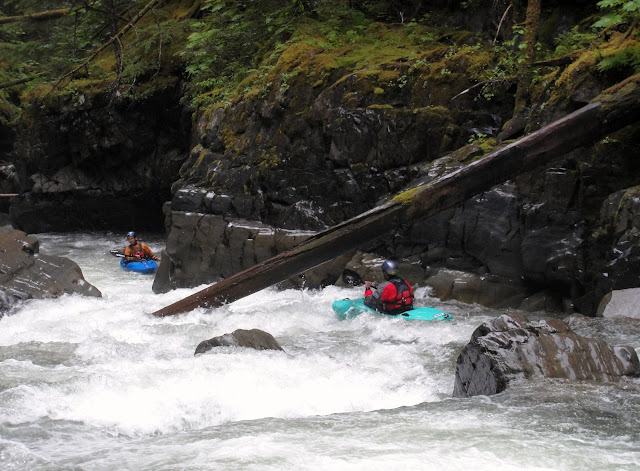 Histerectomy Rapid, Shegunia Creek
The plan for the last day was to do East Boulder Creek again before heading home, and this time I was in. Levels were slightly higher than the last time, in fact it was primo by local standards. Running a creek like this requires a pretty solid and organized safety plan, and thanks to Sean for leading this up. 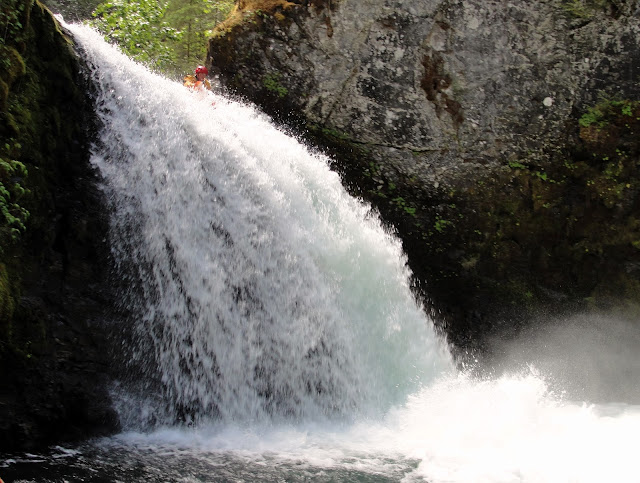 Sean on Blue Fungus, East Boulder Creek
We pulled Mike out of the creek after his deck imploded when he plugged the landing on Blue Fungus, and I got rescued after getting stuck in the second falls on Double Drop. Two of our crew also got broached on a mid-stream boulder just beside a log jam and needed help getting unstuck. Overall however, it was a great run and the cheers at the take-out this time was definitely well-earned. 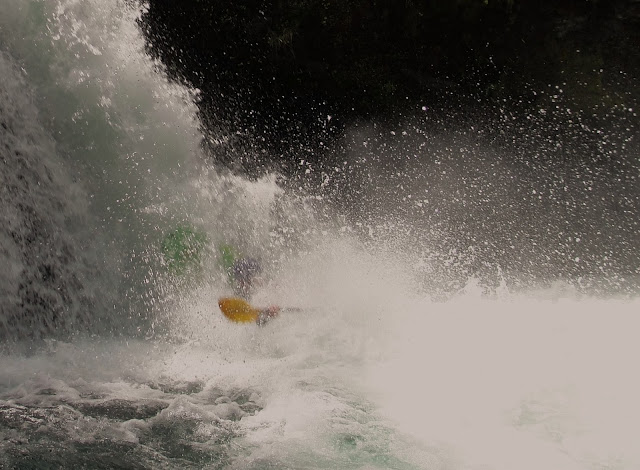 Matt on Blue Fungus, East Boulder Creek
Lost and Found: At the put-in of East Boulder on Sunday afternoon, I thought I'm probably gonna be so nervous I won't really want to get out and take pix on the run, so I didn't think of taking my camera. But Mike said he'd grab it and take some of us running the first waterfall. Not being one to turn down a kodak moment, I agreed and ran the falls and Mike gets the shot. Sweet! My camera then ends up in Seans boat and after running the teacup section, I decided I wanted to take a picture of the four waterfalls, which is a very impressive view (that you'll have to imagine now - dough!). We looked for the camera in Sean's boat and quickly realized it somehow fell out while setting up safety earlier. Losing the camera isn't actually that big of a deal it's losing all the great pix I had from our trip. Crapola! Amazingly, a couple weeks later, Corey found the camera floating behind one of the waterfalls, and 3 months later it was finally returned. The camera died but the memory card is fine. For all the pix from this trip check it out here: northwest trip. 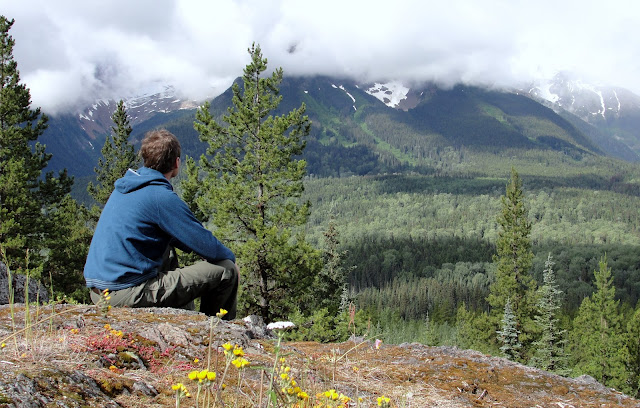 Beautiful Northwest British Columbia
That's all from this road trip. Thanks to everyone that gave us the great hook ups along the way, especially Sean, Joe, Morgen, Amy, Corey, and Tlell. Till the next one, keep on paddling!!
Posted by Matt at 9:32 PM

If you had the gold one it just meant you had more money to spend on it, but in replica watches enthusiast circles rocking a steel one to this day means you likely dedicated a lot of effort in hunting. The swiss replica watches behind this tactic is that the much higher mark up on precious metal cases help cover the very high costs of both the development and the manufacturing of said new replica watches sale or features. Time and again we see brands painstakingly develop complicated movements or other hublot replica which they will only make available in precious metal cased versions even if other models of the same brand do come in steel. Based on what I learned about manufacturing colored ceramics, I go so far as to say the source of the issue is in the rado replica sale used to color it as pigments.