This past weekend marked the NW Brigades annual paddlefest, which was again graciously hosted by Wayne and Carol at their property in Loos. Apparently the word is spreading about our fantastic paddle parties, as we had newcomers this year, all the way from Vancouver and New Zealand (by way of Dawson Creek). Saturday was spent on the Morkill River (class I through IV) which has something for everyone. 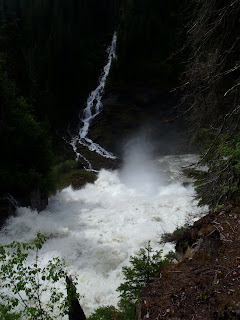 
After a quick sight seeing trip to the 30m, awe-inspiring Morkill Falls, we hit the river. Two canoes did the lower Morkill, while the rest of the group paddled the middle Morkill (class II+), completing the first swim-free middle Morkill run in all of PaddleFest history - hooray! 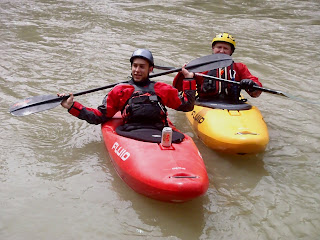 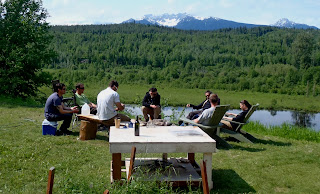 No bugs (or hangovers) here.

The big kids headed off on a Forgetmenot Creek mission, but the plan changed due to some issues with water levels and wood, so they did a second run of the upper Morkill instead. The rest of the group headed to the Holmes River, which is "located about 5 minutes east of town up the Holmes River Forest Service Road. As you drive along the FSR, you'll soon see Beaver Falls which isn't really a waterfall, just a big short rapid. The normal put-in is at the 15 km bridge. The Holmes is a fast river with several long continuous rapids (grade III+). The run finishes off with Beaver Falls (grade III+ to IV) pictured below, before the take-out near the highway". Read more about McBride area whitewater here: 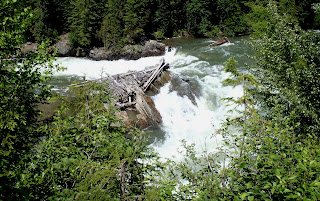 Beaver falls - there was wood.


Beaver Falls had some logs in it, so that last section was not an option, and take out at the rec site upstream was necessary. 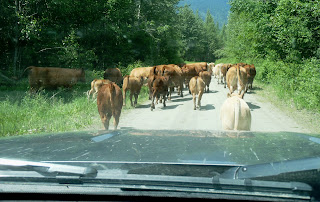 
And, just our luck, there happened to be a cattle drive, taking 150 head up the Holmes FSR - so PaddleFest became CattleFest for a few moments. Fortunately Ricks previous life experience as a cowboy allowed us to get around them doggies in no time. 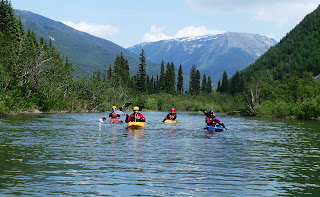 Right below the put in - seems serene now, but this river becomes full-on very quickly!


The Holmes was quite high (highest those that had previously run it had seen it) and was a full-on exhilarating ride. Everyone had a fantastic time! Another year - another successful PaddleFest - Thanks again to Wayne and Carol for hosting, and to all the shuttle drivers. Hope you can make it next year!
Posted by Dee at 5:22 PM