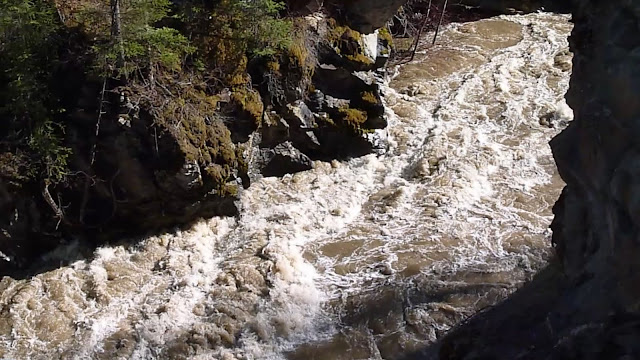 The Willow River went into flood this spring reaching the third highest water level ever recorded with a peak flow measured Friday May 13, of 440 cubic meters per second (cms). This all happened within the span of a week when a few days of rain, warm weather, and melting snow caused a dramatic spike in runoff. The view of the river from the highway bridge as shown above, was an unrecognizable maelstrom of huge boils, surging diagonals, and exploding waves all moving at the speed of a train. The picture below is what House Rock looked like. 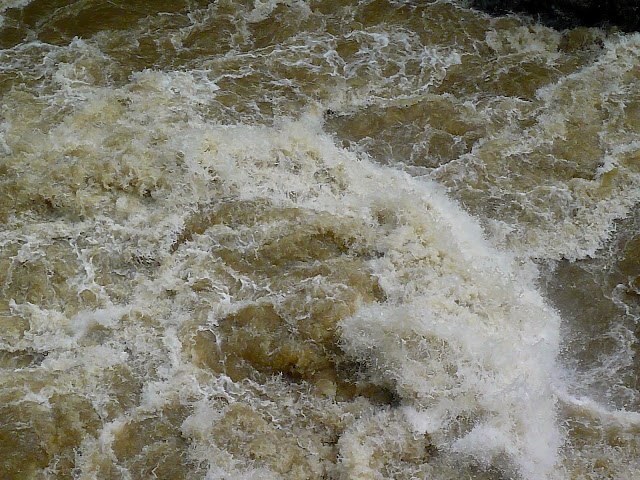 There were a few that considered running it, but unfortunately two enormous logs stuck themselves in the canyon. This made the margin of error on an already difficult run extremely slim. Too bad but for mere mortals like myself, I guess we don't have to prove anything now. Here's a pic looking upstream where Freak My Beak would be. Hopefully the logs flush otherwise we'll have to do some covert river habitat alterations... 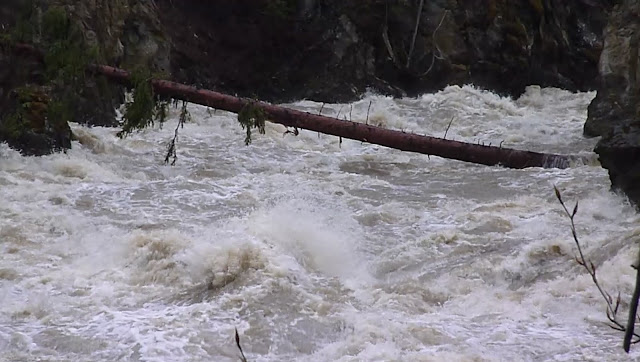 For the record, data collection on the Willow River began in 1976 (Environment Canada Water Office, Historical Data). The highest level ever recorded was on May 19, 1982 at 611 cms. That would have been pretty amazing to see. I wonder what Killer Canyon looked like then? Here's a shot below of some manky bits in the canyon taken during this years flood, and here's a short vid of it: Killer Canyon (be sure to watch in highest quality). 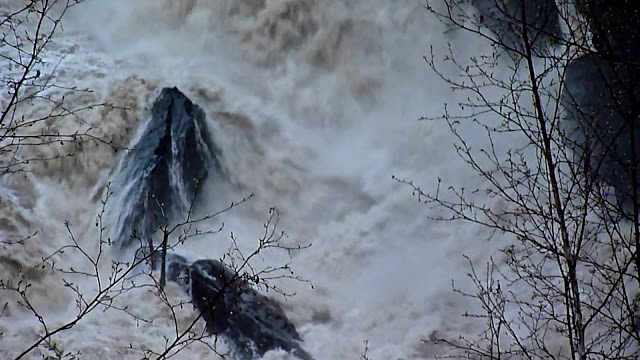 Further east of the Willow the runoff has also been pumping on the Bowron River. The Portage Canyon section near flood water levels (class III) is a fast and bouncy good time. In fact the river is moving so quickly that during an unexpected rescue situation, it took about 200 meters to get the swimmer and his gear to shore safely. No worries though, he was dressed warmly! 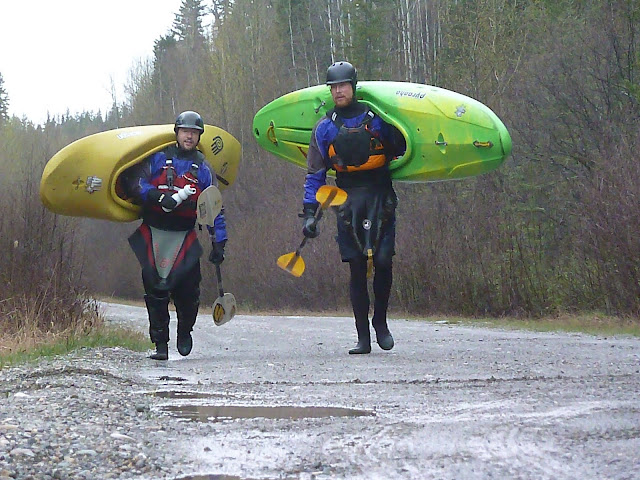 The stretch of whitewater near the highway bridge that crosses the Bowron is the Boulder section (class II). In terms of difficulty, it doesn't change much with the water level even at flood. This makes it a great run for guided novice boaters wanting to pick up their game. The Boulder section ends at Wayne's World, one of the best surf waves in the region. As of this blog post, the wave is flushed out but we expect it in once things drop a bit. 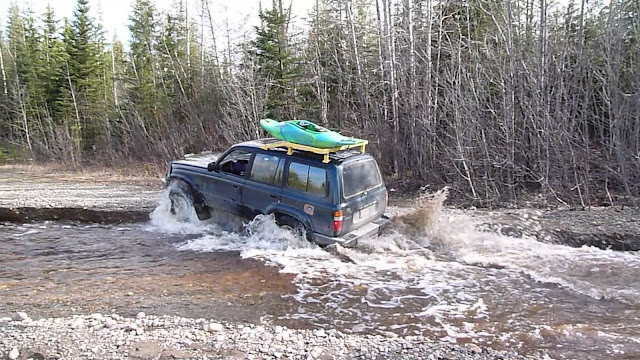 During the first trip to the Bowron this spring, we found the road to the put-in washed-out. In our attempt to cross things almost ended in disaster. After watching Al expertly navigate the crossing as shown above, I gave er' guns and ended up hung up on the far bank nearly rolling my truck in the middle of the creek. Thankfully Al was there to save my ass and winch me to safety. Now that the water has subsided it's a little easier getting through. Until they fix the road however, you will need a 4X4 to get to the put-in for the Bowron-boulder run. 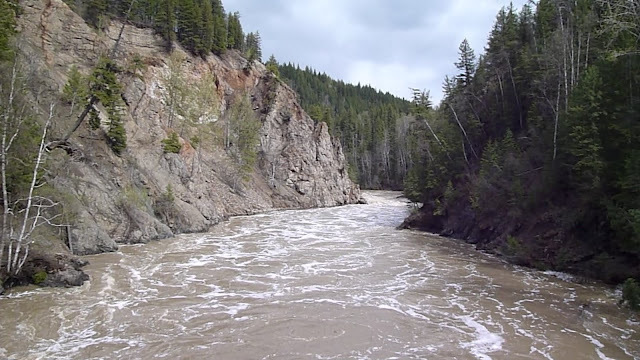 Another river near Prince George that has also been flooding this spring is the Cottonwood. The picture above was taken from the bridge for the middle section take-out. Not sure if this is a record flood but it's certainly a lot of water. I'd guess that upstream in the canyon it's pretty crazy. Recently there was some media attention on the Lower Cottonwood because of the homes that were at risk of falling into the river. Gotta wonder about the sense of building on a flood plain, check out this vid:
That's all for now. Hopefully I'll get some shots of people actually kayaking for the next blog update. Not the easiest thing to do in a flooded river, that is, bust out the camera and snap the action while sitting in a boiling eddy with no shoreline. No matter, let's enjoy the high water while it's here. Oh yeah, and what's that bright yellow thing shining up in the sky? Nice! See you on the water... 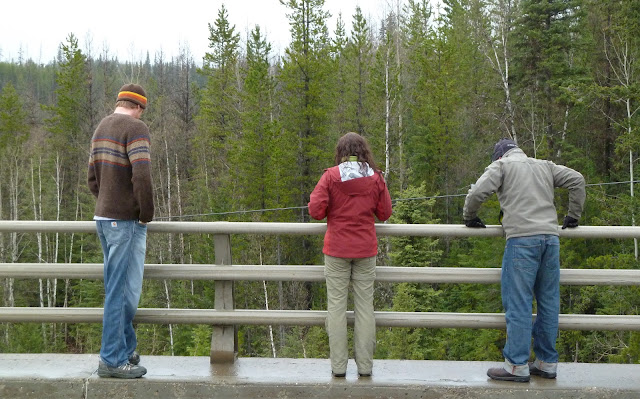 Postscript (July 5, 2011): Water levels have simmered around PG to near-normal levels for most rivers, but the Nechako, Fraser, and Quesnel are still very high. A couple of us got out on the Isle Pierre section of the Nechako River at 940 cms, about 200 cms more than the normal "high" level for the run. Nothing to write home about, but some bouncy good times in the first rapid and a very fast run. Check out the pic below... 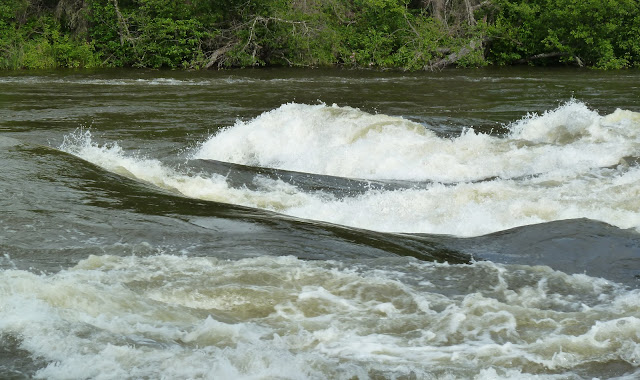