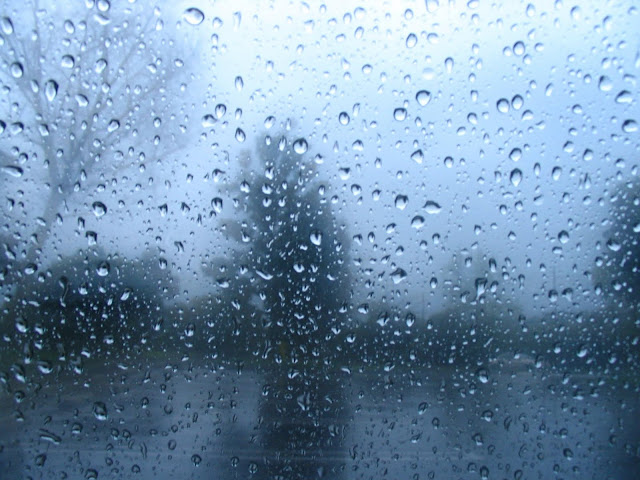 Wet, cold, cloudy, miserable, depressing, dismal.... these are just a few of the colourful adjectives I've heard to describe this summer in Prince George. While these may not be far off the mark for the weather, it's not how I would describe our whitewater season. Despite the lack of sunshine, us boaters really have had very little to complain about. Water levels are higher than normal for this time of year, giving lots of options for boating close to home or road trips away. 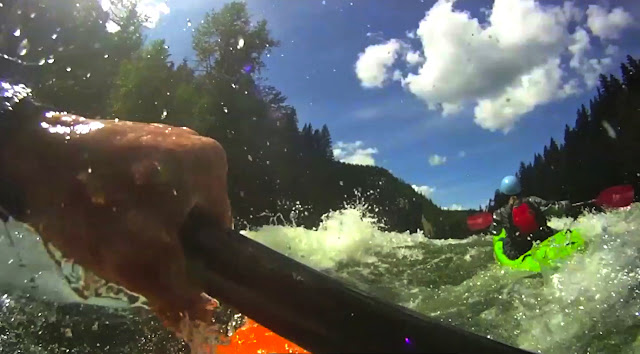 High Water Likely
Peak flows on the Cariboo and Quesnel Rivers usually occur a little later than our local rivers due to the higher elevation watersheds. With the big snowpack this winter combined with the wet weather this summer, the peak flows in Likely this year we're some of the highest in memory. A few of us managed to get on the Lower Cariboo in late spring and early summer at super-fun high water levels, before returning in July to have a go at the other runs. 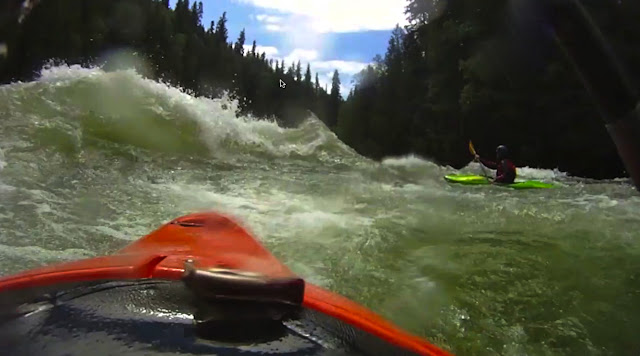 After hearing from our paddling friends in Williams Lake that the Upper Cariboo and Quesnel were off the hook and in flood, we were keen to check things out for ourselves. Just like they said, it was massive. Probably some of the biggest whitewater I've done since the Rio Futaleufu. No eddies, moving with the speed and power of a freight train, and some of the hugest crashing rapids any of us have paddled through -- especially Bubbleyum (IV) on the Upper Cariboo. Thankfully there weren't too many holes and it was all flushing through. We can't be sure what the level was for the Cariboo as the rock gauge was underwater and there was no eddy at the put-in. 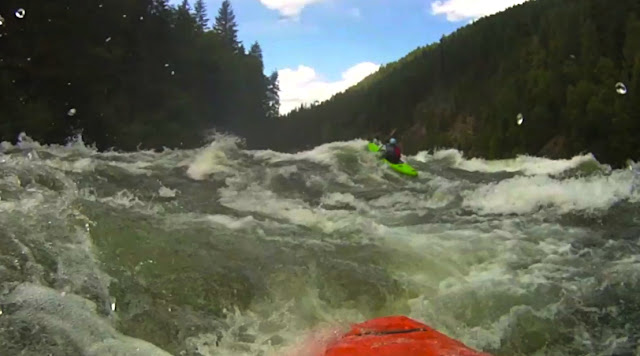 The Upper Quesnel gauge for this trip showed 2.6 m. The waves in the White Kilometer were like crashing ocean surf with some up to 12+ feet in height! But overall this section wasn't too hazardous really (class III+). We had a look at the Devil's Eyebrow section with binoculars from the road to Quesnel Forks, and even from a distance it looked pretty bad ass with a deep river-wide hole and a lot of swirling whitewater. Having no idea if there was a line and knowing that scouting may not be an option, we decided not to run this section. So far as we know the Eyebrow has never been paddled this high, and this is according to Likely locals Jay and Wayne. Check out the vid I put together from our weekend here: High Water Likely. Thanks to Ian for running the POV camera! Check out this wave below, with Rebecca on the crest and Ian in the trough. Note the angle of the trees in the horizon compared to the wave-hole and think about it... 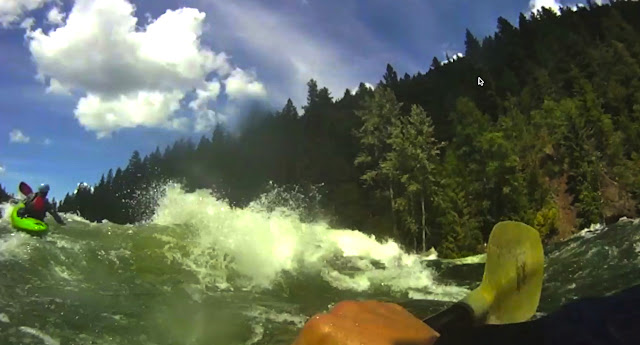 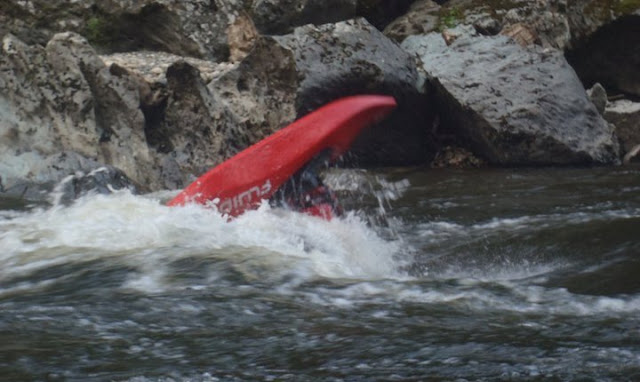 Willow River
Above is a shot of Mike Brine getting funky on Diamond Wave at our local whitewater run, the Lower Willow. Normally this river drops and comes into playful levels in late June and by early July it's gone. This year the play came into form mid-August and the continued wet weather has kept it up. Super fun! And it doesn't get much easier for eddy-service play than Diamond Wave and Surf City. Keep an eye on the online gauge (LINK Willow River at Hay Creek at the bottom of the page), where between 3.45-3.85 meters is good play in the Lower Willow. 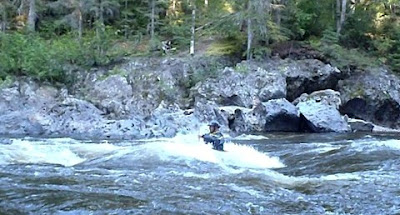 The Upper Willow has also seen plenty of action this August with lots of beginners getting out, learning the basics, and developing their skills. Super stoked to see our little kayaking scene grow in Prince George! Any beginners interested in getting out should check our forum as there are experienced people willing to help out, including beginner river runs, gear advice, and a couple available club boats to loan out. 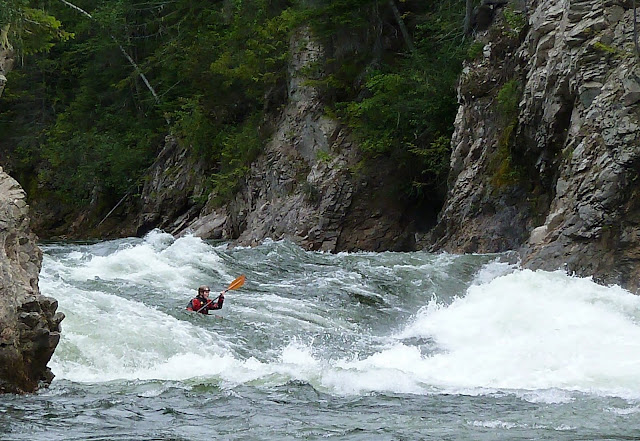 Clearwater Road Trip
Above is a shot of Alene dropping into "The Wall" on the lower section of the Clearwater River, from a road trip here on the August Long Weekend. This river has to be one of the classic whitewater destinations in Canada, with world class play and a variety of big water runs for most boaters. No surprise that the level was high for this time of year, a little too high for the monstrous Pink Mountain wave but still great for one-timers like Tsunami and Buckaroo. It was a super fun weekend and we even had some hot sunny weather. Here's Alene again, in the middle of it with Richard looking on from the eddy. 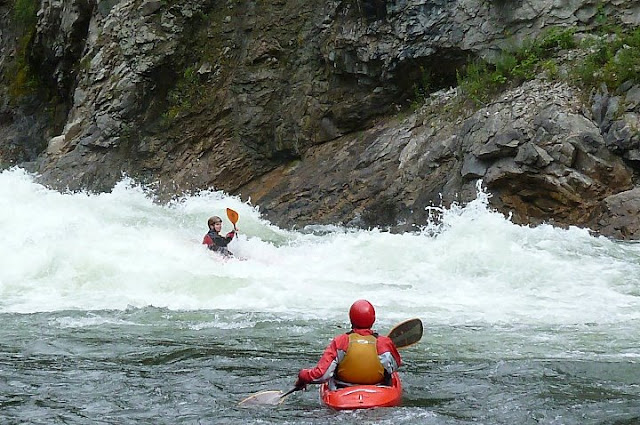 Upper Fraser
While taking in the Robson Valley Music Festival this past weekend (LINK), Ian and I made it out to the Upper Fraser River. Without question this is one of my favorite runs in BC. Apart from the incredible scenery, it has a wicked fun combination of technical, continuous rapids with a big water feel. Level for our run was 60 cms, or medium-low. Ian ran Overlander Falls and finally after 8 attempts over the last few years, nailed it smoothly and made it through upright. Awesome to see! I was pretty happy just to take pictures, as seen in the sequence below. 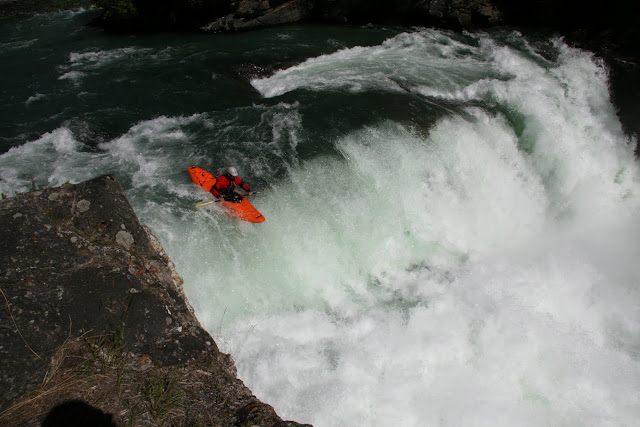 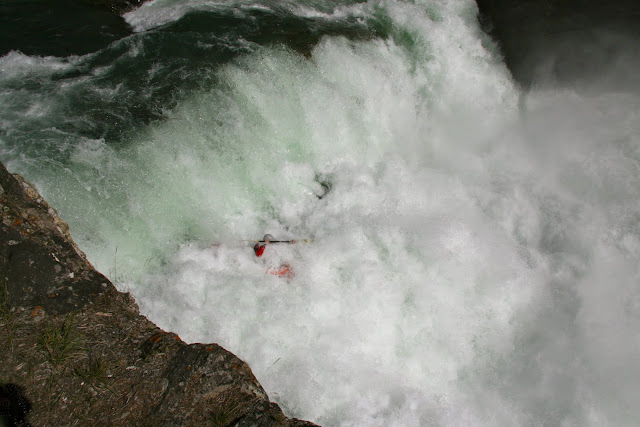 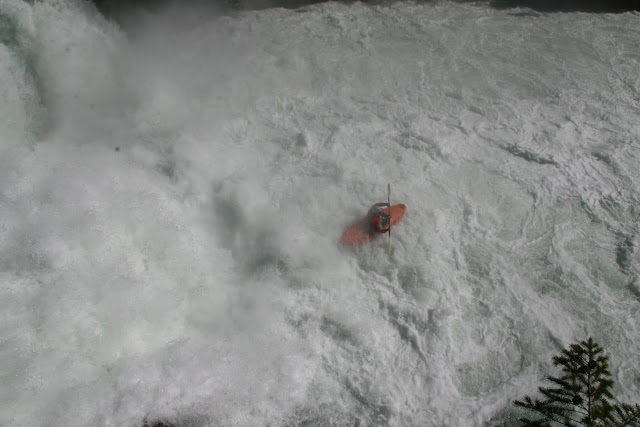 Terminator, class IV for our run, is the crux rapid and it never fails to get my heart going. Like usual, I got eaten and tossed into the river left eddy at the bottom. My exit wasn't particularly graceful but I came away in my boat unscathed nonetheless. Exhilarating! Worthy of a few hoots through the last stretch, and thankfully the festival beers that night were not from a booty. If you ever want to check out Terminator, turn towards the river at the Mount Robson Visitor Information Centre, park at the bridge across the canyon, and have a look upstream. Terminator is the big drop at the end of the view. You can get a closer look if you walk upriver along the trail and hike down. 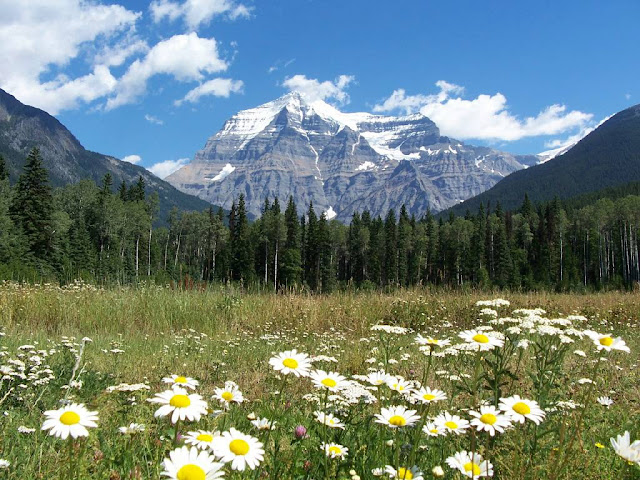 Likely Road Trip
Look through this blog post and all the links and you'll see lots of trip reports, videos, and pictures of paddling in Likely. The reason being is that for big, fun, exciting whitewater within a reasonable driving distance from PG, it really doesn't get any better. During the last weekend in August, we made the trip here to hook up for some river action with other boaters from Quesnel and Williams Lake. Weather-wise, it turned out to be one of the best trips of the summer with big blue skies and WARM sunshine. 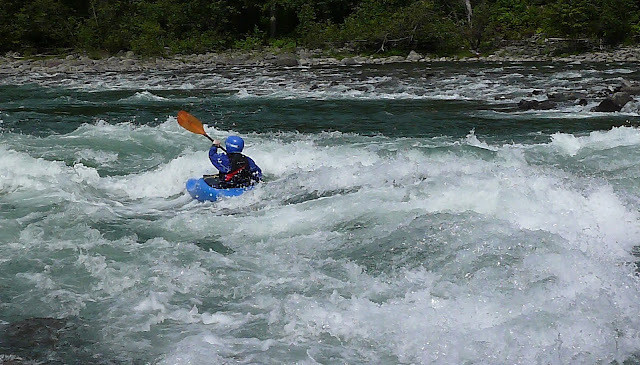 Above is Jess Stanley on the Lower Cariboo (II-III), who smoothly made it through her first time down with not even a flip. It was a super fun run with a great bunch of boaters and big grins all around... 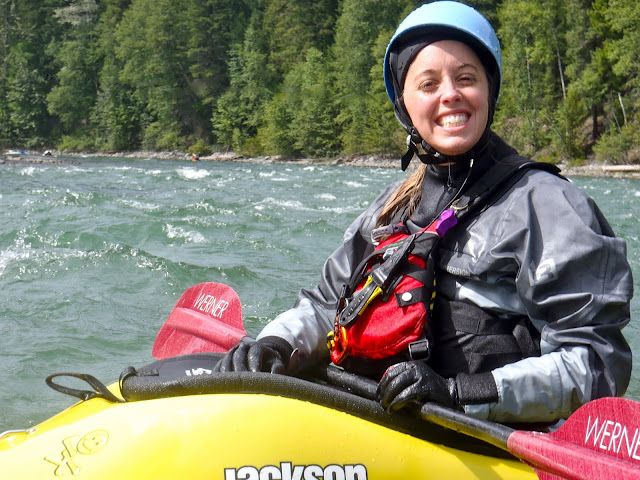 The Upper Quesnel gauge (Quesnel at Likely) was 1.25 m for our trip, well down for our flood runs earlier in the season but still a solid medium level and much higher than normal for this time of year. Note that levels during UnLikely Fest are usually between 0.50 m and 0.75 m. The put-in wave was barely in during the weekend, and only good for flushy front-surfs. There were consistent rapids all the way from First Drop through to the Bullion Pit, with the biggest stuff near Best Drop. Unfortunately it's difficult to take pictures of the Upper Quesnel so you'll have to imagine with these descriptions only.

Fraser and Matt D came down the Quesnel to the Bullion Pit (III+) for their first time. This was the biggest and most difficult whitewater either of them had experienced. It was also the highest level Duncan had ever done it. They all made it through without too much of a thrashing and were super stoked. Nice work gents!

The final constriction or "notch" of the Eyebrow is where the entire river narrows to about 3 meters. At this level it was like a huge toilet bowl and getting through upright was a roll of the dice, with some people skipping over the boils and others like Wayne, Richard, and myself getting flushed down the drain. If the drain opened up in front of you, you were getting gobbled whether you liked it or not. 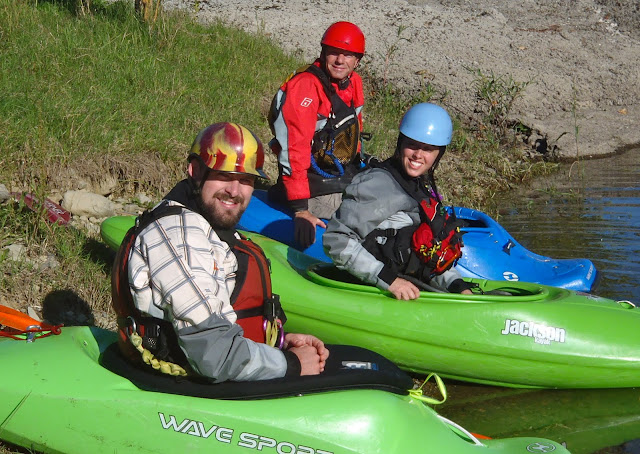 Above is Jay from Williams Lake, Rebecca from Hope, and Richard from Quesnel about to head down the Upper Quesnel for another run. Below are some more shots of the Lower Cariboo. 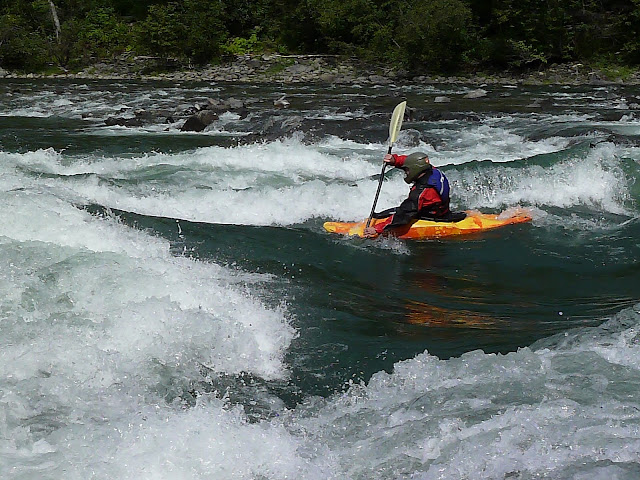 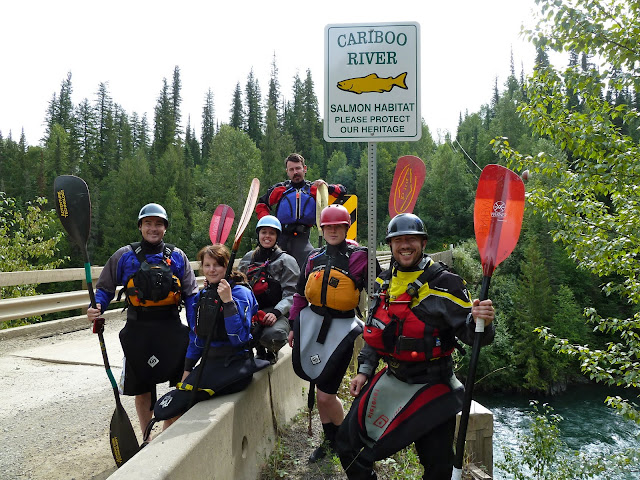 By all accounts, this road trip was one of the best of the paddling season thus far. Gorgeous weather, awesome whitewater, and great people. Thanks again to Duncan and Deanna for hosting us! Don't forget the UnLikely Paddlefest is September 16-19.