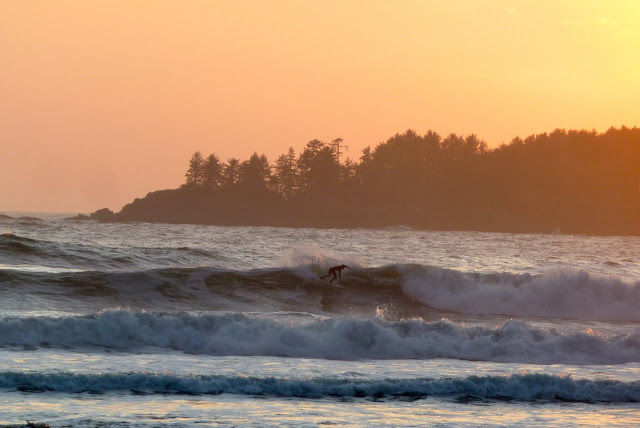 Located on the west coast of Vancouver Island next to Pacific Rim National Park, the town of Tofino is well known as a resort community that's popular with tourists, beach lovers, and storm watchers. It's also considered to be the surfing capital of Canada and is a great destination for a winter kayak road trip.

The surf is spread out along a series of west-facing beaches south of Tofino including Mackenzie, Chestermans, and Cox Bay. Further south in the adjacent National Park is Long Beach, Wickaninnish Beach, and Florencia Bay closer to the town of Ucuelet. The surrounding scenery is spectacular with open ocean, rainforest and coastal mountains. 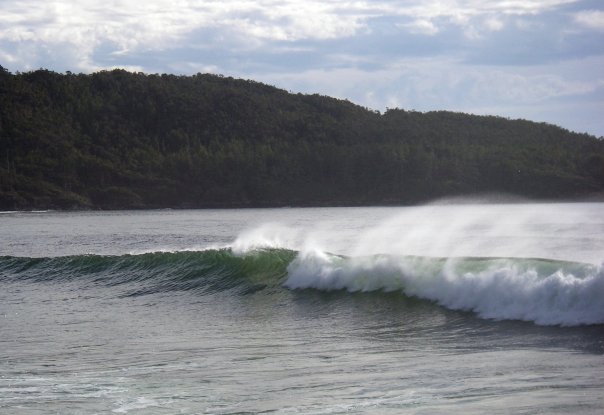 Shown above is a beautiful peeling right taken in Cox Bay. If you get waves like this consider yourself lucky because surf conditions on the west coast are quite variable. Generally the most consistent surf is found during the fall to spring season, but this is also a time when huge storms can occasionally blow through bringing wind, rain, and huge waves. During the summer months, there's certainly a better chance of sunshine and cleaner conditions, but you can also get skunked and have no waves at all. 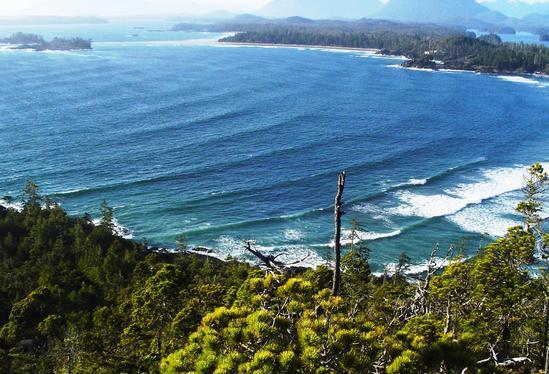 Understanding the forecast conditions is important to planning a surf trip and knowing what to expect once you're there. The first time I went to Tofino I was a novice. We stayed at a place right in Cox Bay and that's the only spot we surfed. While it was convenient to stay and surf in the same place, the conditions at Cox were too big for most of us. The more experienced kayakers couldn't get outside to the green waves, and the novices in the group got worked. There were several swims. No biggy, but not really an ideal introduction to surf kayaking. Had we known there were other beaches nearby with more moderate conditions, I don't think we would have surfed there. 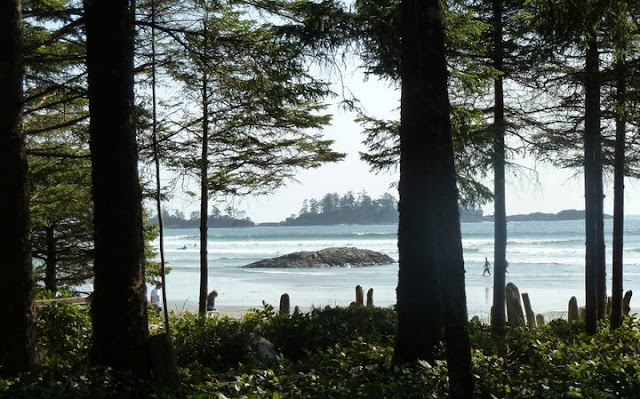 To find out the forecast or what current conditions are like, check websites like Magicseaweed, the Washington Marine Forecast, or buoy data at La Perouse Bank. The most important variable to pay attention to is the size of the swell, because it has the largest influence on how big or small the waves will be. Keep in mind that the swell size does not translate directly to wave height. Many other variables influence wave height such as swell direction, wave period, wind speed, wind direction, and tides. 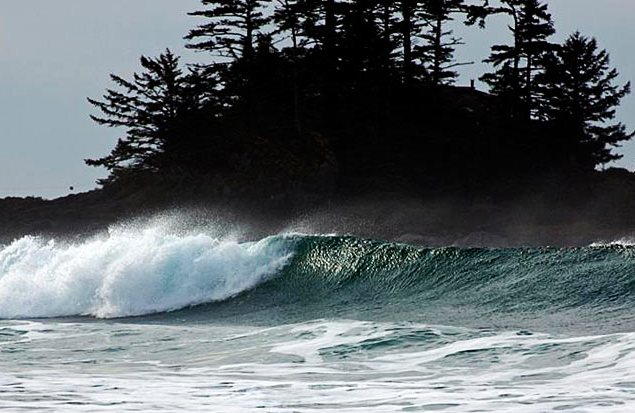 Generally, when the swell is really big (~15 foot +), it's better to head to spots like Mackenzie Beach where it's sheltered from the brunt of the swell. When the swell is much smaller than this Mackenzie will be totally flat, but Cox Bay, Long Beach, Wickaninnish, and Florencia Bay will still have good waves as they are more exposed. Between fall and spring, it's usually somewhere in between and then Chestermans is where it's at. 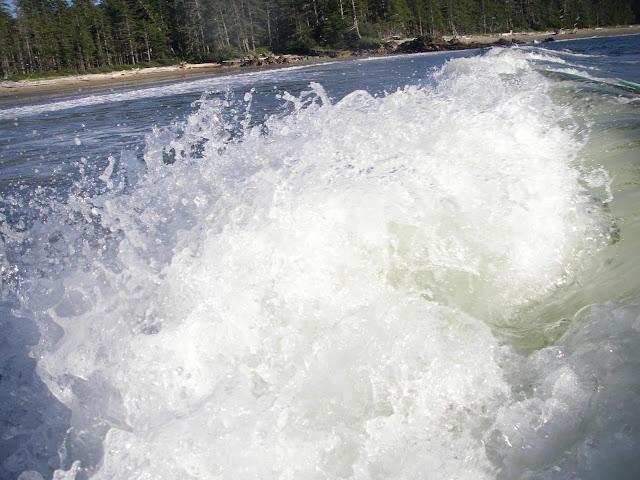 Conveniently, it's quite easy to drive around and check out the three main beaches closest to Tofino (below), as they will have enough variety for any level of paddler. While driving south into the National Park isn't necessary, it can be fun if you're into exploring or it's busy and you'd rather avoid the crowds. 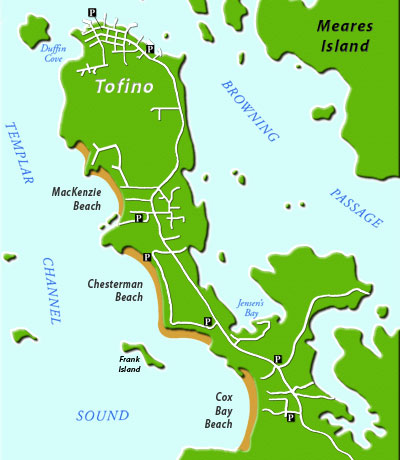 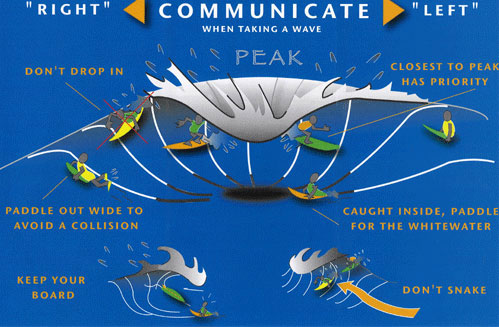 For the uninitiated, it's a good idea to learn basic surf etiquette before paddling out (above). This includes not dropping in when someone else is on the wave, giving priority to the person closest to the breaking peak of the wave, and not paddling around someone who's waiting for a wave (snaking). 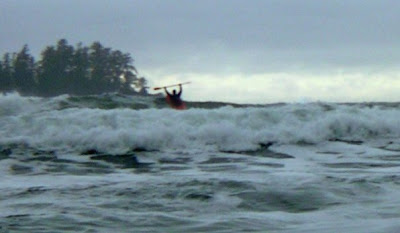 After that first humbling trip to Tofino in 2006, I returned several more times. During fall or winter when we were jonesing for a whitewater fix, a few of us would head down there for a few days. It was a fantastic place to learn the basics of playboating  and get comfortable in bigger whitewater features. 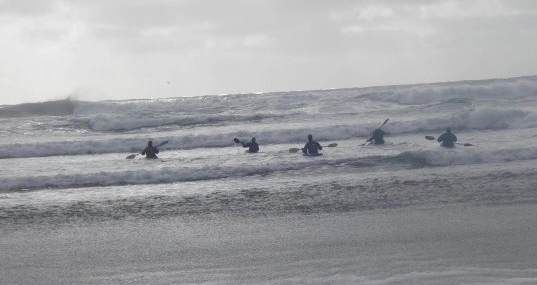 One kayak trip that sticks out in my memory was during the Remembrance Day weekend in 2007. When we arrived we had awesome conditions including sunshine and fun waves. However, during the second night a massive storm slammed into the west coast with 100+ km/h winds and 25 feet swell. When we got to the beach the following morning the seas were a maelstrom of whitewater. When the wind gusted it almost knocked you over. Going out in the water was not an option at most spots. 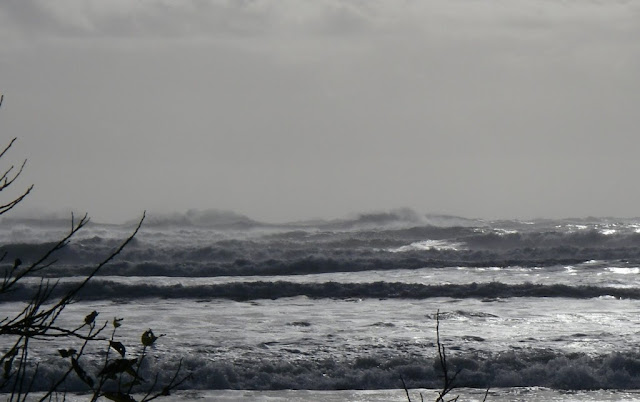 But we had driven a long time to get there, so we headed to Mackenzie Beach where it wasn't as crazy. Below is a shot of me on a wave well inside of where the big sets were breaking. Look closely and you can see the looming grey walls of water in the background. 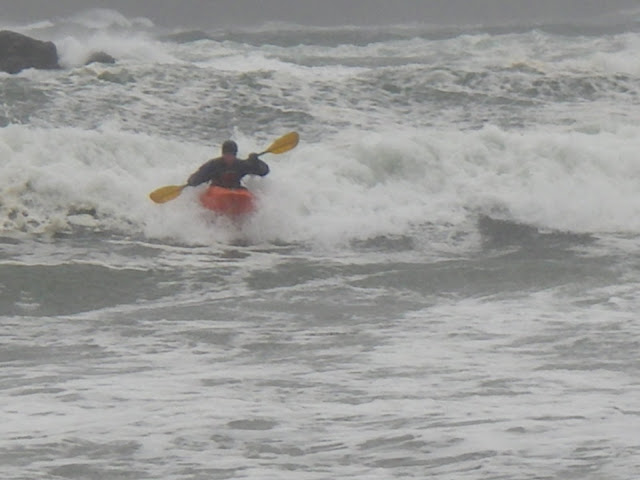 Extreme storm conditions like the Remembrance Day trip can happen on the west coast, especially during late fall or winter. Generally though, they are uncommon and don't last long. Most people stay out of the water when they do happen, not just because it's unsafe but the wave quality is usually very poor during a storm. Can you imgaine surfing the waves below? 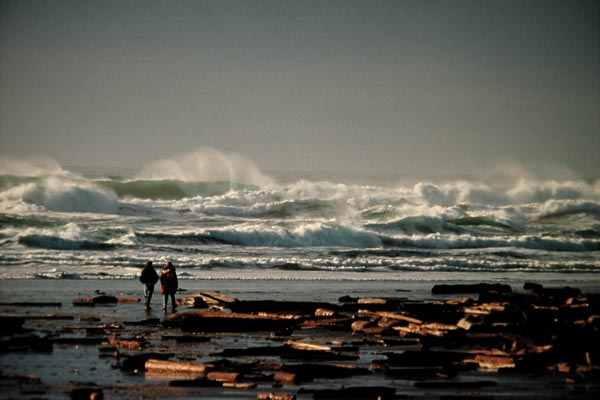 Most of time, kayak surfing in Tofino is suited to any level of boater. This is because of the variety of beaches that provide options for the size of surf you want. Beginners can learn to play "inside" where the smaller waves are, and because the beaches all have sandy bottoms it's reasonably safe of underwater hazards (i.e, no reef or rocks). It is also easy to wade out of the water if you need to self-rescue. 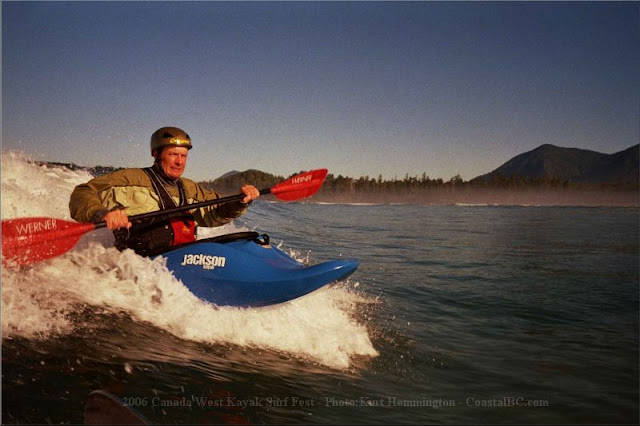 For intermediate and advanced boaters, the biggest waves and the best potential for fast rides and dynamic moves are "outside", where the green waves first start breaking. All the modern playboating moves are possible on a decent-sized ocean wave. 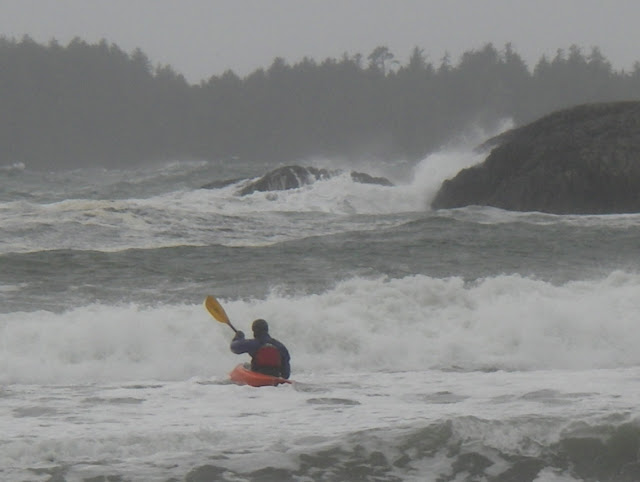 As far as the cold water goes, it's no different than paddling around PG in the early season. As long as you're properly outfitted, it's easily tolerable. 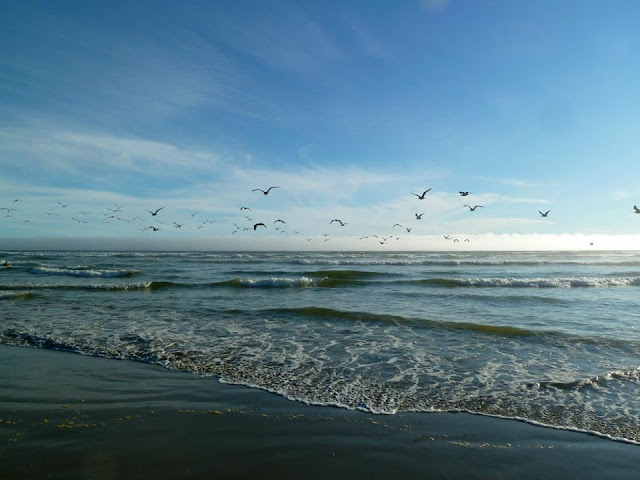 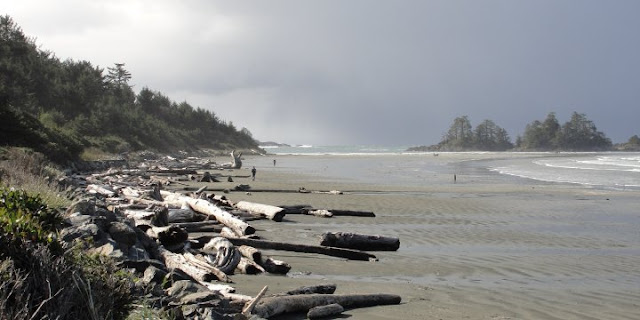 Apart from ocean kayak surfing, there's some great whitewater rivers to check out on the island as well. The whitewater season on Vancouver Island is during the interior's offseason. The Cowichan (class II-III), Naimo (class II-III), Gordon (III-V), and Koksilah Rivers (III-IV) are super fun and not far off the beaten path to Tofino. Be sure to look up Don and Rose at the Warm Rapids Inn for hook-ups as they live and work right on the Cowichan River. Don't forget there's also the Capilano River (class II-III) and Lynn Creek (III-IV) in North Vancouver if the level is good. 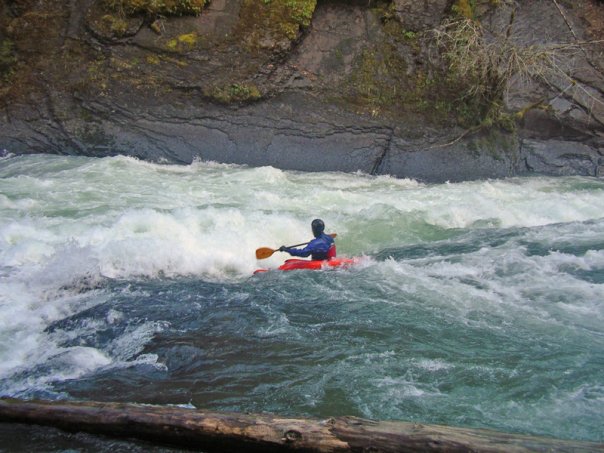 Before signing off, I should add that there are other decent places to surf on the west coast of British Columbia aside from Tofino. On the southern end of Vancouver Island these include Jordan River, Sombrio, and Port Renfrew. On the north end of the Island there's Raft Cove and San Josef Bay. Up on the north coast of BC there's Haida Gwaii (picture below), a stand-out if only because of its proximity to Prince George. It may not have the amenities of Tofino, but Haida Gwaii definitely has the waves and wild west coast scenery. As a surf destination it barely receives any attention at all, but I think the locals like it that way. Enjoy! 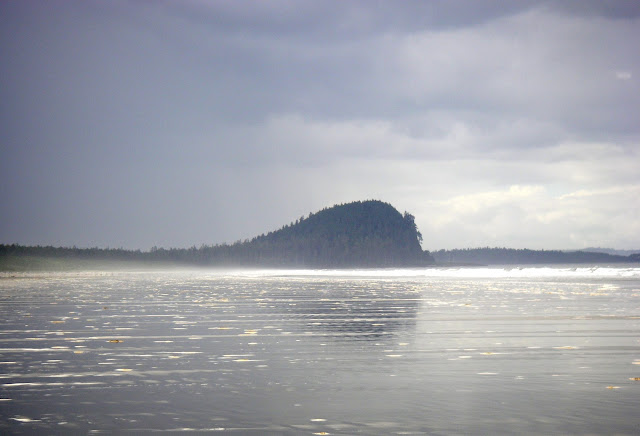