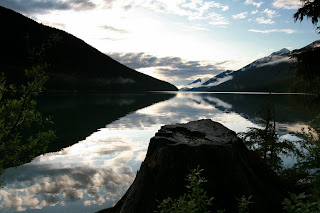 Both Matt Delong and I have a reputation for extreme slowness in the club. No surprise, then, that this write-up is so late.

It would definitely be pushing it to call this a club trip... in fact it was probably the smallest club trip since the president of the Baltimore State prisoner rehabilitation society suggested Christmas Dinner with Hannibal Lecter. Nevertheless back in June Matt and I loaded up our sea kayaks and headed south to the Bowron Lakes for what we thought would be four days of gentle paddling and soaking up the Cariboo Mountain scenery. There would certainly be plenty of paddling, and as it turned out, soaking.
After a night camping in the park near the put-in we attended an early morning orientation session in which the park warden showed us the various ways we were likely to get killed by bears. She also mentioned that it would be unlikely we could outrun the mosquitoes. Unperturbed we loaded our gear into our kayaks and figured we'd make a quick start whilst the other paddlers - all in canoes - had to have their gear weighed. The first part of the circuit is a long 2.4km portage that had us both puffing and sweating before we'd turned the first corner. We'd loaded some gear in backpacks and some in the boats, but it was a long, tough haul in the heat. The mosquitoes prodding every time we stopped encouraged us to go faster.
Kibbee lake was the first actual paddling and the small lake slid by in about 20 minutes. We had a quick lunch on the far side and then tackled the second longest portage, 2km, to Indianpoint Lake. Indianpoint started to give me a sense of what being in the wilderness is really like, there were no people and other than the slow splash of two kayak paddles there was no noise. We held the left shore and crossed the lake fairly quickly, spotting our first moose on the far bank.
We'd aimed to get the first three portages out of the way on day one, so when we arrived at the end of Indianpoint Lake with plenty of afternoon left we knew we were in good shape. We decided to try a different approach and moved all our gear across the portage, then came back for the kayaks. I wasn't sure it was any easier than hauling the lot in one go, but it was a nice day for a walk. Plus it gave the mosquitoes two chances for an evening meal. The bugs were bad there, mainly due to the high level of Isaac Lake. The far side of the portage was all boggy. I suggested to Matt we paddled down some of Isaac Lake, and we soon found a campsite for the night. After a pizza dinner we both turned in. Something creeping in the campsite during the night gave me a scare and I sat for a while wondering if nylon tent was to a bear just like wrapping lunch in a bag.
It started raining in the night and didn't stop for two days. We got up and started down Isaac Lake extremely late, paddling all afternoon in the rain. I was wearing drytop and pants but may as well have dressed in a teabag, by mid-afternoon I was soaked through and shivering whenever we stopped paddling. Matt was little better and when we came across a guy fishing he tried to talk and was not able to get a sentence out properly. The fisherman offered us a hot drink and we found that we were at one of the few cabins around the lake circuit. The four guys in the cabin made us hot tea and after a short discussion we decided to stay the night outside on a tent pad. Sadly the tent pad was on a small spit of land between two gushing rivers and the rivers were starting to flood the site with all the rain. Added to that the four guys had spread the remains of their fish all over the place. We cleaned up but were convinced that flooding, bears or hypothermia were going to get us.
The following day we pressed on down Isaac Lake in the rain, I'd figured we would manage the whole lake in one day but as morning turned to afternoon and rain to hail, we pulled up at the end of the lake shivering and ran for the group shelter there. Someone got a wood stove going and neither of us wanted to move. So the third day of the trip ended and we were still, technically, on Isaac Lake. So much for doing the whole circuit in four days, and I was rather glad we packed five day's worth of food! 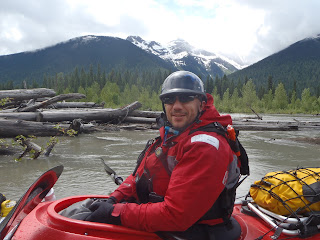 Matt taking five on the Cariboo River
We were both determined to make progress on day four and we left camp fairly early - for us - in the morning. We ran 'The Chute' which is a rapid leading from Isaac Lake into the Isaac river and then enjoyed the rapids as we followed the river for a bit. There were a few portages and after McLeary lake we were on the Cariboo River. It made a lovely change to let the current take us and the sun came out along with the view. We were surrounded by mountains instead of clouds. We passed a wrecked canoe and shouted to make sure no one was stranded nearby. The canoe looked like it had been there awhile though.
The river emptied into Lanesi lake and almost immediately a storm hit us, the headwind crashing waves over us and making it very difficult to paddle. I saw Matt with his head down powering into the wind and just tried to follow, battling the wind for control of my paddle blades. When we pulled in to check on some canoeists the wind died and we got to paddle almost a third of the lake in sunshine before the wind hit us again. We turned the South West 'Corner' of the circuit and paddled into Sandy lake and out of the wind. It was late but we both felt strong and just agreed to keep going. 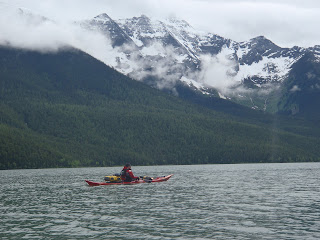 Lanesi lake during a rare break in the weather
We figured there were three short portages to do and then it would be all paddling. If we could get the portaging done that evening then we'd easily finish the circuit the next day. As my supplies amounted to a bowl of oatmeal and some beef jerky I thought that was a good plan.
The rain came back and made paddling unpleasant for a couple of hours, until at the end of Babcock lake we started portaging and the rain stopped. The sun, just about to dip over the horizon, came out from behind a cloud. We were approaching Skoi lake and talking when a big moose stepped up out of the lake right in front of me. She had a calf and they both swam off much to my relief. As we began paddling across Skoi lake the water steamed in the sunset. A Loon sat calling. Another moose on the far bank ran into the forest as we paddled closer. When we reached the shore and stopped for the night finally, we'd been paddling for eleven hours straight. I ate my last dinner by the light of my headlamp.
It was hard to start paddling the next day... the thought of a burger and a hot shower was about all that got me moving. We paddled up Spectacle and Swan lakes and then wound through the Bowron river into Bowron Lake. My body was on automatic and had long since gone pretty numb as we paddled back into civilisation. There were houses and motorboats on Bowron lake. We congratulated each other at the top and whilst we loaded the truck the park ranger turned up and asked if we were the two people that had made an emergency VHF call from in the park. Apparently two guys had stopped in the stormy weather and simply ran out of food.
Matt had to stay awake and drive us home which was not easy. We both looked like refugees from Woodstock. All we could do for several days was sleep, eat and scratch our bug bites.
I'd recommend the Bowron Lakes - they are a wild and beautiful part of BC and I'll definitely paddle them again some day. But it will probably be at a warmer and less buggy time of year ;)
Fraser.
Posted by Unknown at 6:20 PM