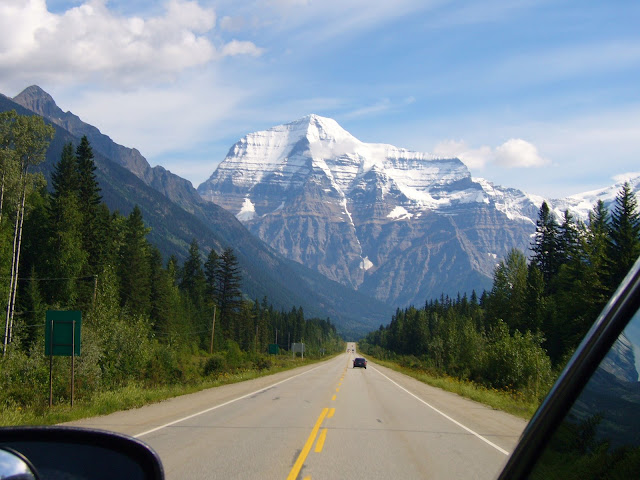 
On this trip we were joined by Brigade old school legends Rick Brine and Ed Day, both still paddling hard and in their 50s. Hardy Griesbauer, Ian Norn, Mike Brine, and myself rounded out the Prince George crew, with Graham Gerry from Quesnel and Amanda Smith from Fernie making up the rest of our group. Levels for our run was 70 cms.


After driving 3 hours from Prince George, we all stopped at the bottom of the Upper Fraser Canyon to scout the most difficult rapid on the run --- Terminator (grade IV+ at this level). Here the whole river drops into a gnarly river-wide hole. Terminator is a mandatory scout for anyone considering running below Overlander Falls. Here's a short video of Terminator:

After leaving a vehicle at Overlander Falls, we drove further up river and put on. The great thing about this run is that the rapids build slowly up to grade III before it's go time. The real action starts at Shithouse Rapid (grade IV), and continues pretty much through to the take-out from there. Below are some pix Ian took of us at Shithouse. 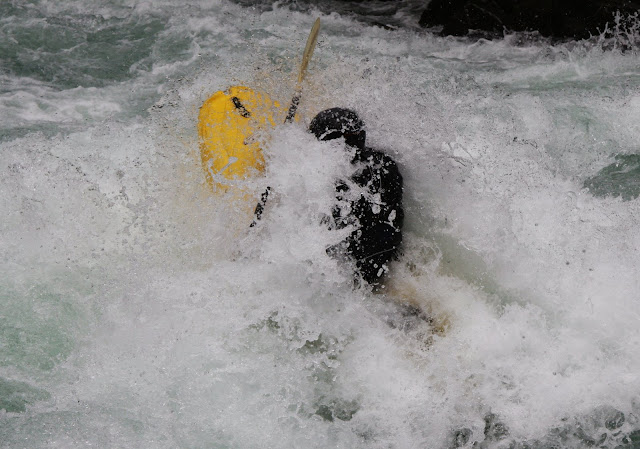 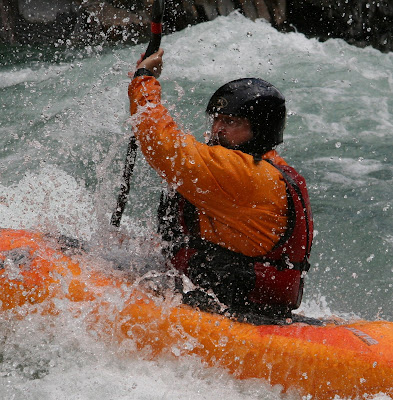 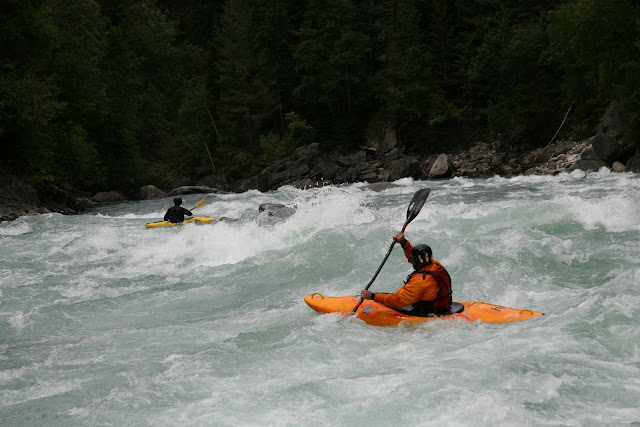 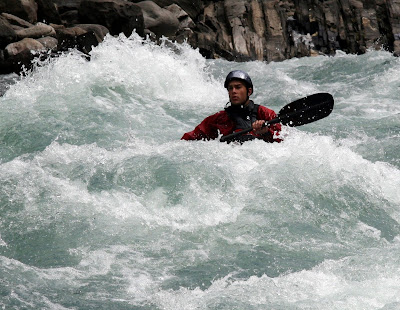 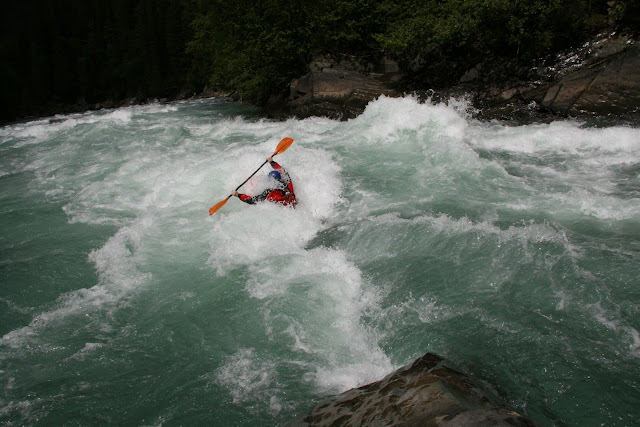 Following Shithouse was Eric's Hole --- a massive drop on river left that you would likely never emerge from. The line was this cool creeky bouldery sneak on the right that spits you out into the huge wave train below Eric's. After this a lot of the named rapids became a blur that Ian, Hardy, or Ed gave beta on, including Boulderdash, Holy Terror, Toilet Bowl, Otter Slide, and Staircase, all grade III+ to IV-. There were also busy stretches of grade III whitewater between the named rapids that gave the entire run a very continuous feel. The only close-call of note would be at Otter Slide, where Hardy, Amanda, Rick and I ended up way too close together above the drop. By the time I got some space and began paying attention to my line, I was way off and ended up pitoning into this jumble of boulders beside Amanda. Kind of terrifying! But also a little funny. Luckily with a little effort I was able to free myself and stay in my boat, and then share a big "wtf?" laugh in the eddy with Amanda.
At Overlander, we paused for a couple pix while Mike debated running the falls. It's a monster if you haven't seen it (grade V), and only a handful of the best decide to make the plunge. No dice for Mike on this trip but I'm guessing he's already planning for the next time. Below is Overlander Falls, followed by a picture of our group at the top of the falls. 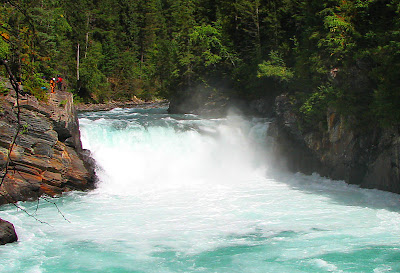 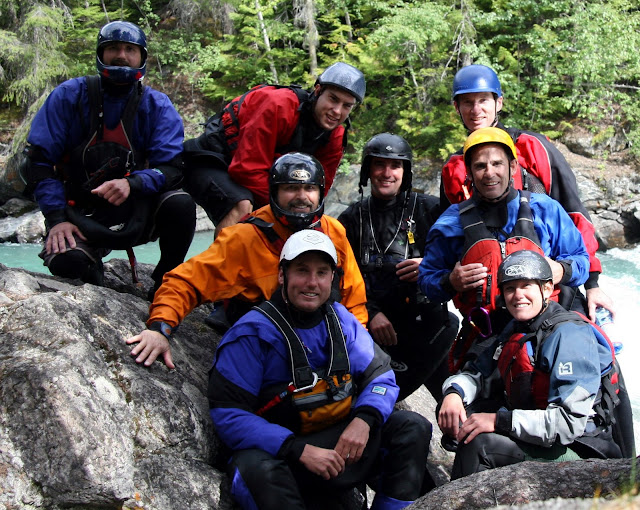 Ian's actually run the falls a couple times, as well as lots of descents through the Upper Canyon. Unfortunately he recently put a hole in his ear creeking, and so flipping isn't an option until he heals up. This also explains the full-face in the above picture, but I can't explain the moustache other than it's totally legit. 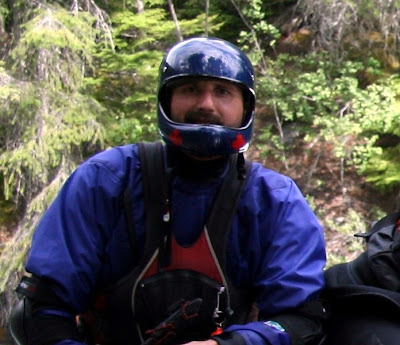 The Canyon is a step-up from the rest of the run, with numerous grade III-IV rapids leading into Terminator. After Graham traded his playboat for Ed's creeker, he lead Hardy, Amanda, and Mike into the Canyon while the rest of us hiked out to Hargreaves to set up for pictures. It was pretty awesome to see everyone run this. To avoid the meatiest part of the drop, you had to get up on this massive ramping pillow on far river left and punch the hole at the bottom. Some had good lines like Mike and Amanda, and others not so good. Here's a bunch of pix of Terminator: 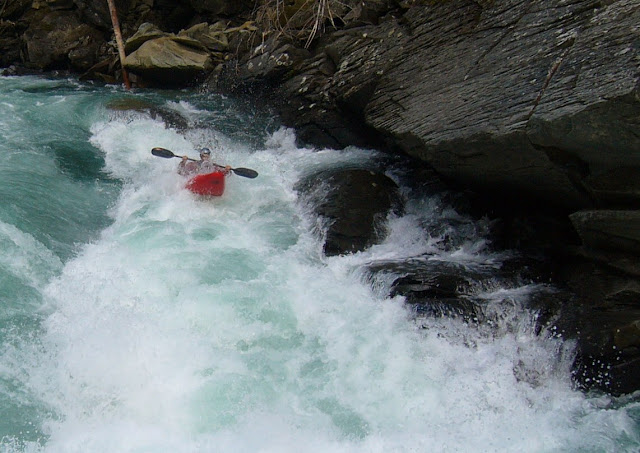 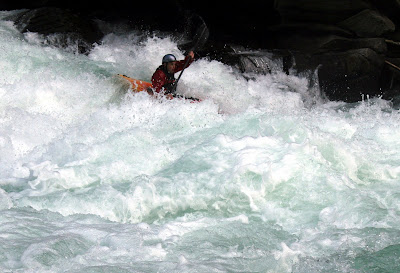 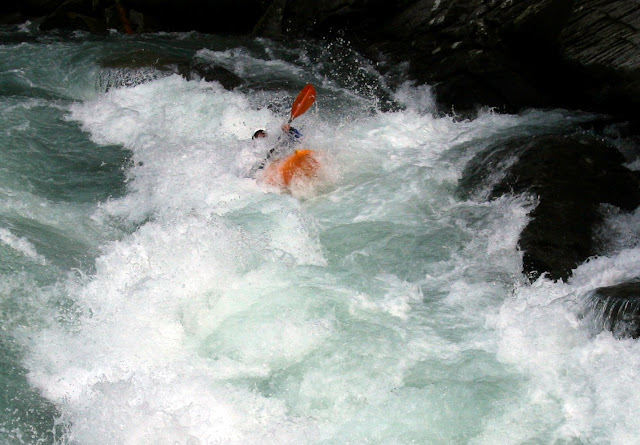 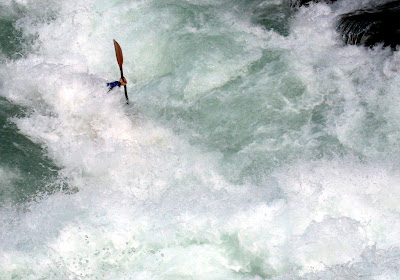 The last stretch to the take-out is a full-on blast through a number of very pushy drops that you can see looking upstream from Hargreaves Bridge. 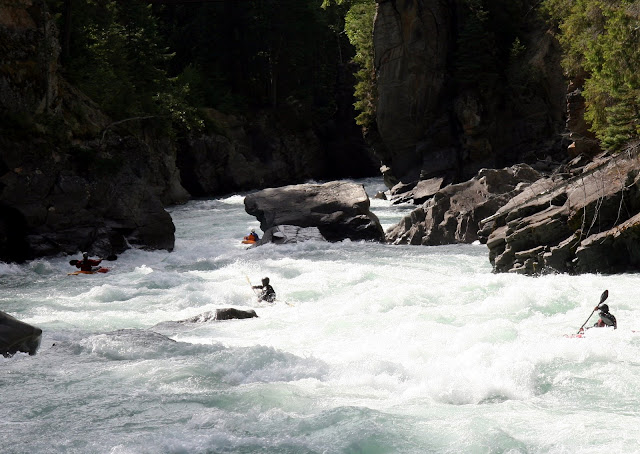 High fives in the sunshine all around at the take-out! Really couldn't think of any other place I'd rather be. Great run, and thanks to everyone on the trip, especially Ian, Ed, and Hardy for the guidance, and Rick and Amanda for driving. Also big thanks to Ian and Rick for the great pictures.
For more pictures of the Upper Fraser trip click here (click on slideshow for best image quality).
For the full video click video here (be sure to click on watch in high quality)
Posted by Matt at 8:55 AM