The Story of the NECHAKO RIVER 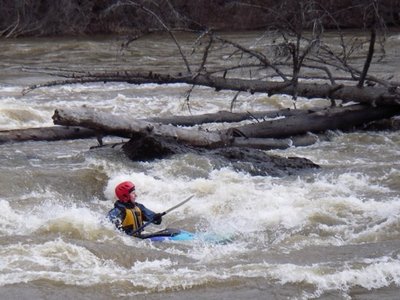 With the low snowpacks and hot dry weather, the rivers around Prince George have already dropped to very low summer levels. There is one exception however. Unlike other rivers in BC, the level of the Nechako is not totally controlled by runoff. Check out the online gauge for the Nechako at Isle Pierre and you'll see that the level is currently on its way up: link. The river has a number of short whitewater stretches that in high flows offer some decent whitewater, as shown in the picture above at Isle Pierre. The river also has a very interesting and controversial history that few paddlers may know... 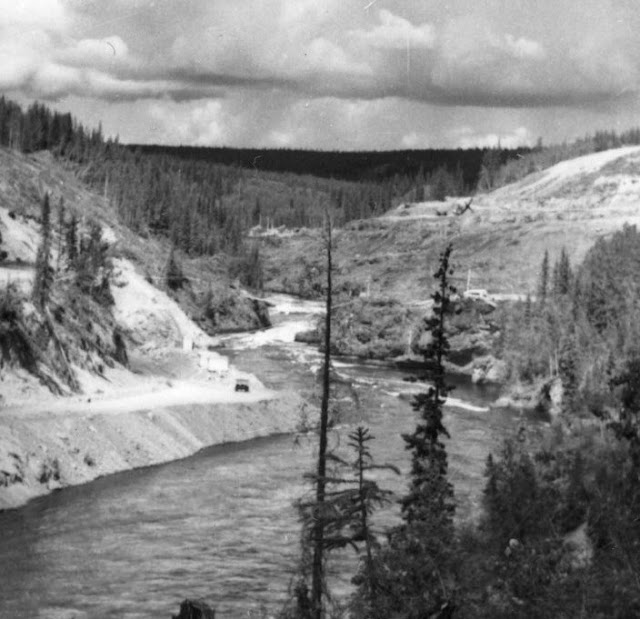 In 1952, the Nechako River was dammed near its headwaters as part of the construction of the Alcan Kitimat-Kemano Project. Approximately half the water was diverted westward through a tunnel in the coastal mountains to power an aluminum smelter in Kitimat. The remainder was re-routed through a spillway at the eastern outflow of the reservoir. From the spillway, water flows into Cheslatta River and drops into the foot of the Nechako Canyon via Cheslatta Falls. It is here where the Nechako River now starts. The Nechako Canyon - once a formidable 7 km long stretch of whitewater as shown in the historic photo above - is now a dry riverbed. The 320 km long chain of lakes and rivers that was the source of the Nechako has become a massive 87,000 ha reservoir, shown below with Kenney Dam. 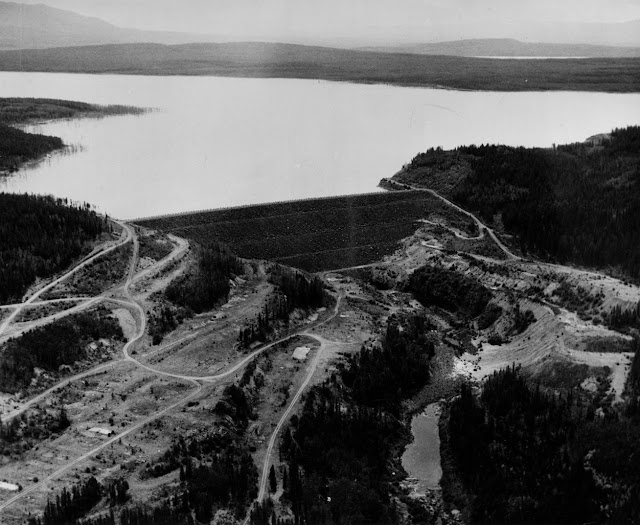 As only half of the pre-1950 flow still drains eastward following the Nechako River, the reduction in flow has resulted in an increase in water temperature and an ongoing problem for the salmon run. The level of the river is managed “in order to achieve a balance among the various needs and interests” (Rio Tinto Alcan, 2010) - primarily power generation and fisheries management. During the summer, flows are typically increased to moderate water temperatures for migrating sockeye and Chinook salmon. This explains why the level of the river is going up right now when all other rivers in the area are decreasing.

In its day, the Alcan Kitimat-Kemano Project was the largest privately-funded construction project ever undertaken in Canada. It created the town of Kitimat in a mostly un-populated area of the province, and was heralded for generating significant economic stimulus in a relatively undeveloped region. Because of this drive for progress however, consequences were not seriously considered. During construction of the Kenney Dam and filling of the reservoir, the upper Nechako River suffered almost a 100% loss of flow. When 50% of the flow was restored 3 years later via the spillway into the Cheslatta, the comparatively large discharge down this small tributary scoured a deep channel and deposited huge volumes of sediment in the upper Nechako (Kellerhals et al., 1979). Fisheries were decimated, and the environment in the upper watershed was forever altered by the reservoir. The long term fisheries impacts due to a reduction in flow have also been significant, but because of the cumulative effects of other developments along the river like agriculture, forestry, and urban settlement, these have been difficult to measure.

Below is a recent picture of the Cheslatta River near the Holy Cross FSR south of Fraser Lake, about 1 km before it plunges into the Nechako Canyon. 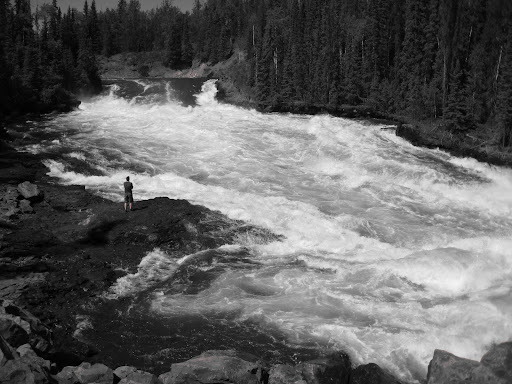 There were significant social impacts as well, particularly on local First Nations. The Cheslatta T'en were given just a few days notice before the reservoir started to fill, and they were displaced with little compensation. Many had to abandon their traditional occupations of hunting, trapping and fishing, and were forced to build a new life in a farming community with which they had little in common. Many lost their livelihoods and their way of life (Carrier-Sekani Tribal Council, 1984).

Alcan’s operation has not been without political controversy. In the original 1950 agreement with the Province, Alcan was provided with water rights to the Nechako River. This gave them the license to divert all the flows from the upper section of the river. During the 70s, flows were reduced as Alcan increased power generation at its Kemano plant. It took several years before the federal government was able to take legal action and force Alcan to release more water to protect salmon (Quinn et al, 2008). Later in the 80s, Alcan initiated the Kemano Completion Project to increase its power generating capacity. The plan was to divert even more water from the reservoir for hydro power. This would have taken 88% of the pre-1950 water levels from the Nechako River. Due to significant public opposition, the project was killed by the Province in the mid 90s. After Alcan took the Province to court, the Province agreed to provide Alcan with replacement power from BC Hydro totaling more than $100 million. Alcan then agreed to further invest in Kitimat by upgrading their aluminum smelter which the Province claimed as a victory. Hooray! Interestingly, Alcan generates some of the cheapest power in the world, so what they generate beyond operating their smelter and for the town of Kitimat is sold back to the Province for a profit (Sheppard, 2006).

There is no doubt that Alcan has benefited the northwest, but whether or not these outweigh the environmental and social impacts is debateable. As well, it’s questionable if the agreement Alcan has with the Province is fair deal to the public of British Columbia. Also, while the power generated here may be more sustainable than oil and gas, considering its history it would be dubious to call it green power.

Increasingly, more is being demanded from our natural resources. We also know more now about how the health of the environment and society are linked, and I'd like to think as we continue to move into the 21st century we can make more informed choices and balance our lifestyle accordingly. Of course we need electricity, but at what expense? And for what purpose? In light of what happened to the Nechako and the deal Alcan got for a public resource, I think about some currently proposed megaprojects and wonder if we've actually learned anything at all. Two that come to mind are Shell's bid to develop coalbed methane at the headwaters of the Stikine, Nass, and Skeena Rivers, and the proposed Enbridge Pipeline with tanker traffic on the north coast. If you live in the northwest, these might be difficult choices for you because of the region’s need for economic stimulus. But really, how sustainable and fair are the benefits? And are they worth the environmental impacts and potential risks? The Nechako River will never be what it was 60 years ago because it's a done deal. However other parts of the north still remain unspoiled. It would be wise to critically reflect on the past and what we already have learned before we make similar mistakes.

If you're interested in supporting conservation efforts in the northwest, check here to find about about the Skeena Conservation Alliance: Skeena. Enjoy the summer, and hopefully see you on the river soon.
Posted by Matt at 3:51 PM

My guess is that while there is a loss in having your replica watches associated. I guess they would have looked into and thought there is a chance they could lose. I just find the coincidence a bit too cute that this rolex replica sale announcement comes right on the heels of Rolex making an announcement about denouncing the replica watches sale of their watches. Sub are pretty much locked in to a scant handful of options. If you wanted something different your only rado replica was to go after market, and in that space watches store was successful in becoming the most known and trusted name. Spending money a nice luxury hublot replica and then spending even more money on top of that for rendering it worthless instead of using a hammer for that, as normal people would have to do.